Isaac Carney is one of the best athletes from the Tulsa, OK area in the Class of 2022.

The 5-foot-9, 130-pound Carney, who attends Holland Hall, is a dynamic track athlete that has taken the region by storm. 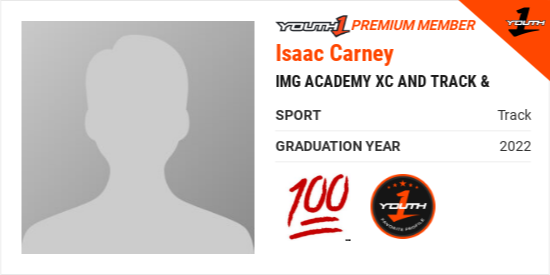 Carney has earned plenty of recognition during his career, such as:

Carney has also competed in the Nike Running Camp at Creighton University in Omaha where he received instruction on form as well as attended presentations regarding race strategy, nutrition, and mental preparation/toughness.

Carney is humbled by the accolades.

“It shows that I am working hard and it is paying off,” Carney said. “To me, it means that hard work is truly a recipe for success.”

No matter the event, Carney is determined to give it his all.

Carney is going all out.

The motor is always at full throttle whenever Carney steps between the lines.

“My mindset is to run my individual race to the best of my ability and have fun while doing it,” Carney said. “I try to not take the ability to run track for granted and realize each race is a blessing, and I run as if it is my last race.”

Carney has great passion and energy whenever he’s on the field. Carney tells why he enjoys the sport of track and field so much.

“I love working out on a sunny day with sweat dripping down my body and knowing that I am getting better. I love the simple, yet complicated aspect of the sport,” Carney said. “It is simple because the sport is just to run as fast as possible, but there are so many different variables that help determine how you want to run, making it a deeply strategic sport.”

Carney has learned many valuable lessons from track that he applies to his everyday life.

“Track and field has taught me that there will be hardships that you must overcome throughout your life,” Carney said. “It has shown me that setting goals and striving to achieve them is the real reward. It has also taught me that keeping a positive attitude through tough times makes them easier to endure.”

“My favorite memory was from my first indoor meet at the University of Oklahoma. The track was 200m, and there were many runners in the race, so I knew I would have to get an early lead in order to avoid being boxed in,” Carney said. “When the gun fired, I got out into an early lead, and as I rounded the first lap of four, I met eyes with my dad. It was a small act, but the ability to know that he was there allowed me to continue at my tough pace and finish the race with a PR.”

Carney takes his role as one of the leaders on the team very seriously. Carney makes sure he’s a daily positive influence on his peers.

“I just try to set a good example by always giving my best effort each rep during a workout without complaints,” Carney said. “Before we run, I always tell my teammates to stay loose and have fun. Even if we may not be right next to each other in a race, we are all in it together.”

Carney is appreciative of having amazing male role models that are supportive.

“I have learned to always put 110% effort into everything that I do. By doing this, I will be the best person and athlete I can be,” Carney said. “The best advice I have received was to focus on myself and the results will follow, do not worry about beating the next man, just worry about being as fast as you can be.”

Carney lists english as his favorite subject in school.

“I have always enjoyed writing and creating stories through my words,” Carney said.

“I really like the University of Arizona, Arkansas, Florida State, and TCU,” Carney said. “I feel like these universities really fit my style and would help me grow as an athlete.”

“I do a core circuit every day in order to build my core strength,” Carney said. “I also believe that drinking water helps improve strength, and I have eliminated carbonated drinks.”

Carney describes what he believes separates himself from the pack.

“I think my hard work and ability to have fun within each situation sets me apart from other athletes. Having fun makes getting better that much more enjoyable,” Carney said. “Also, I think my grades and academic achievements will help separate me from the crowd when being recruited.”

Carney is striving for greatness in all that he does.

Asher Beckley
Football | Running Back
Get your profile