2026’s Owen Lansu is a commanding presence in the huddle

2026’s Owen Lansu is a commanding presence in the huddle

Owen Lansu is one of the best players from the Chicago, IL area in the Class of 2026.

The 5-foot-9, 120-pound Lansu, who attends Lester Elementary, is a dynamic player that works as a quarterback and defensive end. 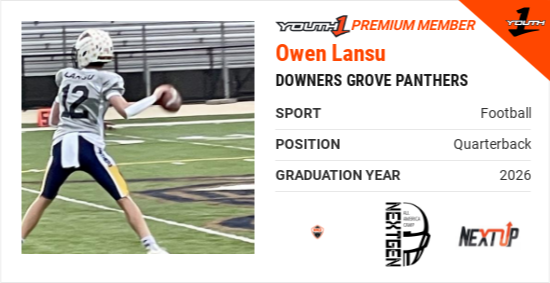 Lansu has earned plenty of recognition during his career. Here’s a list of some of his accomplishments:

Lansu is humbled by the accolades.

“I feel honored and proud because I have worked very hard to get better. It is very rewarding to be recognized and given the opportunity to play with and against much older players,” Lansu said. “It was very cool to meet and compete with players from all over the country and at different grade levels. I am always excited to see where I fit in with my skills against kids my age and older than me.”

No matter the opponent, every game Lansu is determined to give it his all.

Lansu is going all out.

The motor is always at full throttle whenever Lansu steps between the lines.

“My mindset is to take care of the ball first and put it in a place only my guy can get it,” Lansu said.

Lansu has great passion and energy whenever he’s on the field. Lansu tells why he enjoys the game of football so much.

“I love being able to look back on the season and all of the hard work during the offseason and know that I did my very best,” Lansu said.

Lansu has learned many valuable lessons from playing football that he applies to his everyday life.

“I’ve learned when you work hard you can achieve or do anything,” Lansu said.

“This entire past season because I feel like our team was the best it has ever been and we were closer as a group than ever before,” Lansu said.

Brian Lansu has coached his son for five years with the Downers Grove Panthers.

Mr. Lansu explains the best parts of his son’s game.

“At quarterback he has outstanding arm strength and accuracy on throws to all levels and a great understanding of our offense. I let him call our plays last season and he took us all the way to our league super bowl game mixing the run and the pass very well. At defensive end he has a good ability to get up the field and prevent a ball carrier or quarterback from getting to the edge,” Mr. Lansu said. “He has very solid QB mechanics thanks to his training with Jeff Christensen at Throw it Deep. At defensive end, he has a very quick first step and uses his long arms to keep linemen off of him.”

Lansu discusses what separates him from other players.

“I think my arm strength and work ethic set me apart from other athletes/QBs,” Lansu said. “My leadership with older kids, size and mechanics are positives as well.”

Lansu takes his role as one of the leaders on the team very seriously. Lansu makes sure he’s a daily positive influence on his peers.

“I demonstrate being a good teammate by always trying my best and leading by example,” Lansu said. “The best advice I give is that whether we win or lose, always make sure you are responsible and have your teammates’ backs.”

Mr. Lansu adds that his son is one of those consummate teammates that every squad needs to be successful.

“He has always played up a grade level because of his ability. At first, he was quiet and just blended in,” Mr. Lansu said. “Now, as the quarterback he takes charge and commands the huddle and the sideline. Owen was voted captain by his older teammates and received the highest number of votes on the team.”

Lansu is appreciative of having amazing male role models that are supportive.

“I have learned that your team doesn’t have to be the most talented to be successful. You just have to be mentally tough. I have also learned that when the people you sweat with and work with are your best friends you can make plays and do things you never thought you could for each other,” Lansu said. “The best advice I’ve gotten is that even though I’m  the youngest on the field, I can make the throws and should believe that I can get it done.”

Mr. Lansu is an advocate of his son’s capabilities. Lansu amassed 25 touchdowns (19 passing, 6 rushing) and only four turnovers last season.

“We were trailing 6-0 against an undefeated team with less than 4 minutes to go late in the season. He told me he wanted to call a go route into the near sideline to try to make a big play. He faked a sweep handoff, dropped, set his feet and threw a 40-yard strike down the left sideline in stride to our receiver who took the ball the rest of the way for a 76-yard touchdown. We converted the extra point and won the game 7-6,” Mr. Lansu said. “We had a couple of other games during the season where teams would crowd the line of scrimmage to stop our running game. Owen consistently hit big, long pass plays against tight coverage to get us back on track and loosen up the defense.”

Lansu has excellent awareness that puts him in position to thrive.

“We were trailing in our last regular season game 14-0 to another then-undefeated team. At the end of the first quarter he told me they were shifting an extra lineman to the strength of our formation and that we need to run back weak side,” Mr. Lansu said.”We changed our strategy and even a couple of the plays themselves during the course of the game. We scored on 3 straight possessions and won the game 21-14. It was his recognition of what the defense was doing and how to counter it that turned the game in our favor.”

Lansu is on the grind to perfect and hone his craft in any way possible. Mr. Lansu loves his son’s drive and determination.

“His work ethic is truly second to none. Every day he engages in some activity to work on his arm strength. He trains with private QB coaches at least twice per week, goes to 7-on-7 practice with a high school team and throws with his friends or with me at a local indoor park at least twice a week,” Mr. Lansu said. “It is that work ethic that has transformed him from a receiver to a top-tier quarterback in just 3 years.”

Lansu breaks down his training routine.

“In the winter, my dad and I go to a local indoor field to throw routes. I train every week in the winter with Throw It Deep and Jeff Christensen,” Lansu said. “I will be playing for a high school 7-on-7 team this spring and summer. I also make sure I do some kind of arm exercise every day that I can’t throw just to keep my arm stretched and strong.”

Lansu is constantly striving for greatness as an athlete.

“I want to be a starter on varsity as a freshman or sophomore, win a state championship and keep my streak of straight A’s,” Lansu said. “I have never gotten anything but an A in school.”

“When I first started playing quarterback I was nervous about having the ball in my hands on every play. I made it my focus after my first year as a quarterback to become much more than someone that just hands the ball,” Lansu said. “Through hard work, I now know that I can make plays in critical situations and that I am not going to turn the ball over and hurt my team.”

Mr. Lansu explains why he compares his son to these quarterbacks.

“I think of him as a cross between Matthew Stafford and Joe Burrow. He is big, strong kid with great arm talent like Stafford who, right now, likes to stay in the pocket and make throws,” Mr. Lansu said. “He is unflappable and confident in his ability to make big plays in crucial moments like Joe Burrow did all season.”

Lansu patterns his mentality after the AFC’s quarterback in this season’s Super Bowl.

“I look up to Patrick Mahomes because I have a similar playing style and I like the way he carries himself off of the field,” Lansu said.

Lansu lists math as his favorite subject in school.

Mr. Lansu lists the improvements that can take his son’s game to the next level.

“Owen struggles with his feet because he has grown so quickly,” Mr. Lansu said. “We are working on his feet, his drop backs and the use of his legs and hips so that he doesn’t rely so heavily on his arm strength. We are also working on his escapability and throwing on the run.”

Mr. Lansu believes the sky is the limit as long as his son continues to stay hungry.

“I believe he is a potential Power 5 starting quarterback and future NFL prospect. He will have the natural size (estimated at 6-foot-5) and arm talent to play at any level. He is also extremely intelligent and can grasp an offense (we have a 100-play call sheet) at a young age to the point where he can call a game successfully on his own,” Mr. Lansu said. “If he can start to use his feet/lower body more efficiently and continue to grow as a decision maker with the football I really think the sky is the limit.”