How 8th Grader (2020) Harrison Bailey Got an Offer From Miami

How 8th Grader (2020) Harrison Bailey Got an Offer From Miami

This piece was credited as a source on Sportingnews.com and in Bleacher Report's article "8th Grade Harrison Bailey Receives Scholarship Offer From Miami," on February 17, 2016.

Back in the summer of 2014, a then 6th grade quarterback with a rounded, baby face under a white Nike hat named Harrison Bailey from Powder Sprigs, Ga. came up to me and thanked me for taking his picture at a football 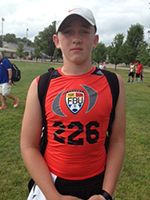 camp.  His dad then asked if his son could take one with me and of course I smiled and obliged.  Little did anyone know, that just two years later, Bailey would receive a scholarship offer, as an 8th grader, from the University of Miami.

“It’s just a blessing,” said Bailey.  “It’s great.  The coaches are great. The school is great. Everything about Miami is great.”

To see how Bailey became the latest in the trend of football players getting scholarship offers before high school, one has look back at his youth career.  As documented in an article from the fall of 2014, I thought that Harrison Bailey could be the future of quarterbacks in the country.   In that article, Bailey's QB coach Tony Ballard predicted that Bailey could be the No.1 player in his class in "a few short years."  That now seems it's possible it could be coming.

The writing has been on the wall with Bailey for a number of years now, as he started on his Hillgrove Hawks Middle School 6th grade team as a 5th grader in a very large GMSAA football conference.  A year later as a 6th grader, Bailey had 31 total touchdowns and an estimated over 1,800 yards passing.  At that age many quarterbacks are simply mastering receiving the snap correctly from under center.

Following his 6th grade regular season he was the quarterback on team Cobb County in the FBU National Championship tournament and threw 15 touchdowns and just three interceptions.  Though his team lost to eventual three-time national champion North Texas, Bailey began his ascent.

“Playing as a 6th grader, I didn’t know what to expect and didn’t really know what was going on.  It was really fun and I loved the whole process.” 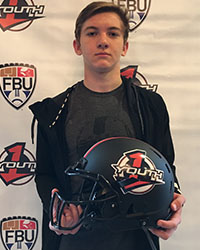 By the time he reached 7th grade, Bailey had grown to 6’1, 175 pounds and word of his abilities started to spread nationwide. Bailey passed for 1,700 yards and 26 touchdowns that year and added 210 rushing yards and three touchdowns that season.  He topped if off with a selection to the 2015 Eastbay Youth All-American Bowl (now FBU Youth All-American Bowl), a game that has pitted many future D1 athletes against each other before they hit the high school hallways.

“It was a great honor to just be selected to a game like [that]. That they viewed me in such a manner, means all the hard work and dedication to the game I love was paying off.”  “To play with some of the best talent was a huge building block for me.”

By February of 2015, Bailey had grown again to 6’2 and 180 pounds and was taking the camp circuit by storm.  In February he was a top 10 performer at the Adidas Georgia Showcase.  Throughout the spring he shined at National Underclassmen Combines, Next Gen All-America Camp and Florida/Georgia Future Stars Game tryouts.

Come May of 2015, Bailey was no longer sporting the baby face and was morphing into the quarterback we know today.  At the FBU camp in Atlanta Bailey was technically just a 7th grader still, but was pulled up to compete with the high school athletes at the camp.  His impressive performance at the camp earned him a spot at his second straight Top Gun camp.

The Top Gun camp was held in Dublin, Ohio in July 2015 and instead of participating in drills with his fellow 2020 athletes, Bailey was again bumped up to compete with athletes in the class of 2019.  Despite the age difference, he was up and away the top quarterback on hand at the camp.

A month later, in August 2015, Bailey’s hard work and stellar play throughout his youth career earned him a selection to the Youth1.com Elite101 list.  The Elite101 list has certainly proven to be a barometer for how athletes will turn out on the next level and Bailey is already proving that to be true again.  On the Elite101, Bailey was ranked the No.1 QB in the class and the No.2 overall player in the country for the class.

This past season as an 8th grader, Bailey wrapped up a tremendous individual career by helping the Hillgrove Hawks to GMSAA 6A championship by passing for 1,667 yards and rushing for 1,207 and 39 total touchdowns in just eight games.  The video game numbers Bailey put up showed that despite now standing 6’3 and 190 pounds, he was more than just a passing QB, but a true dual-threat.

“Since the 7th grade season was over, I have had the mindset that I have one year to get ready for High School football. That’s my goal is to compete for a job at the high school level next season.”

Individually he was selected for the FBU Youth All-American Bowl for a second time and he also quarterbacked GFL-Georgia to the championship game of the FBU National Championship tournament.  Furthermore, Bailey was named a finalist for the General Dennis D. Cavin Youth Player of the Year Award.

“Being nominated for a prestigious award like that was a blessing and showed that hard work really does pay off.  The more you work, the more you can achieve and get awards like that.”

Fast forward to the scholarship offer from Miami. 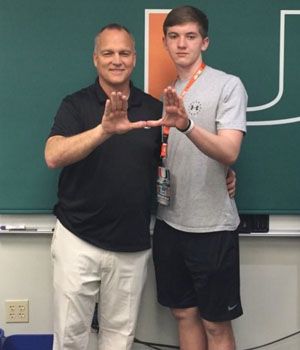 Bailey was asked, and took, unofficial visits to the University of Georgia this past season under previous head Bulldog coach, Mark Richt.  When Richt was let go by Georgia following a 9-3 season this year, he became the new head coach at his alma mater, Miami.  With Richt came many of his Georgia ties and relationships he had built since 2001.

“Yesterday was the first time I ever met him [coach Richt].  The offer came around 6 o’clock, but we probably talked from 3 o’clock to around 8 o’clock.”

During the conversation, Bailey noted that they talked about everything.  From looking at defenses, to football talk, to Richt’s career.  Along with Bailey’s father, they took a golf cart around campus and ate a café on campus.

As for the exact moment of the offer, Bailey was shocked.

“He said we usually don’t offer young bucks like you but you’re talented and we think you can handle it.  We don’t think you’ll get a big head and we want to offer you a scholarship.”

Now that the Hurricanes have made first move, don't be surprised if more schools follow suit in the near future.