Pair of 2020 Quarterbacks From Georgia Could Be The Future

Pair of 2020 Quarterbacks From Georgia Could Be The Future

In many things in life there is a constant arms race to find the newest, the biggest and the best.  Whether it is cars, household appliances, technical gadgets or anything, the ability to claim to be “the first” to do something is feather in anyone’s cap.  This phenomenon of latest and greatest translates especially well to the world of prep football and especially at the glamour positions—like quarterback.

Deep in the heat of SEC country Georgia there lives a pair of current 7th graders (class of 2020) signal callers that both have the potential to be extremely special players.  Harrison Bailey of Powder 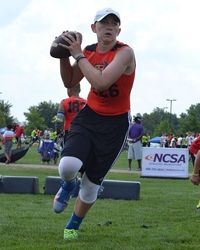 Springs, Ga. and Aaron McLaughlin of Suwanee, Ga. only live an hour apart from each other but the ability the two quarterbacks have is sending shockwaves around the country.

“I will go as far as to say that these kids could be No.1 and No.2 in their class in a few short years,” said Georgia-based Tony Ballard, CEO of Hustle Inc.  Ballard has trained hundreds of youth, high school and college quarterbacks from coast to coast, but also has the unique perspective of training both Bailey and McLaughlin on a 1-on-1 basis.

“To have the size, fundamentals and uncoachable intangibles that Harrison and Aaron possess at this stage is something I’ve rarely, if not ever, seen.”

One of the many things that separate Harrison Bailey from his peers is the size and mass of the 6’0”, 167 pound signal caller.  The writing has been on the wall with Bailey for a number of years now, as he started on his Hillgrove Hawks Middle School 6th grade team as a 5th grader.  Now, as he is starting his 7th grade season, Bailey is looking improve on his 31 total touchdowns and estimated 1,800 yards passing and that couldn’t be too difficult since he rarely played past half time in his games last year.

“I am excited about this year because I have a coach that will allow me to pass the ball a lot,” said Bailey. “Our team is running a watered down version of the high school’s offense. This is my third year running it, so this year is going to be great.”

A great year is something the 6’2, 165 pound Aaron McLaughlin is hoping to have after missing nearly all of the past two seasons, including last season after being diagnosed with Osteomyelitis which is a serious staph infection in the bone.  While Bailey has already proven what he can do on the field, much of what McLaughlin can do on a football field is still up in the air and riddled with possibilities.  He has shown glimpses of what he can do at camps such as the prestigious MVP camp in Georgia and in All-Star games like the Florida/Georgia Future Stars Game where he was named the starting quarterback for Team Georgia this past summer. With such accolades in the past, McLaughlin is ready for regular season football again this year.

“I play for one of the top D1 travel team teams in the state of Georgia located in Central Dekalb called the Jaguars,” said McLaughlin. “We commute close to an hour to and from practice in order to play for 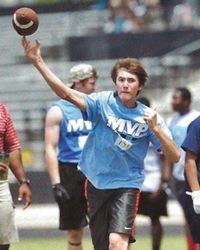 McLaughlin has already had a taste of success in his comeback season with the Jaguars winning the HotBed Classic in Jacksonville where he was named the tournament’s top offensive player.   The Jags were also the runner up in the Centennial Bowl tournament.

Harrison Bailey has also gotten off to a hot start playing in the Georgia Middle School Athletic Association (GMSAA) conference this season.  Despite coming out on the wrong side of a 40-22 loss to defending champion Rome, Bailey passed for 241 yards, 3 touchdowns and an interception in the game.

His hot offensive start this year is something we expected to see considering the roll he’s been on since last regular season concluded beginning with his performance in the FBU National Championship tournament.

“We went to the finals and lost to North Texas for that tournament. I threw 15 TD’s to 3 INT’s,” said Bailey. “To play against the competition from around the country just makes you better.”

Following that performance in January, Bailey continued through the summer camp series. Most noteably were his performances at the National Underclassmen Combine (NUC) in Atlanta and at Football University’s (FBU) Top Gun camp in Dublin, Ohio. At Top Gun he was named to the Nexxt1 First Team All-Top Gun team.

While these athletes are still very young and can control how much work they put into their crafts, one thing both athletes have no control over is the genetics they’ve been blessed with.  McLaughlin’s father played both football and baseball at Furman University and went onto compete at a professional level in cycling.  McLaughlin’s mother played basketball at Bethany College and was a member of the USA Triathlon National Resident Team at the Olympic Training Center in Colorado.  For Bailey, his father played basketball at Pikeville University in Kentucky and his older brother is currently a freshman on the basketball team at Piedmont College.

While it shouldn’t be long before colleges around the country begin to keep an eye on these two signal callers, Harrison and Aaron have already began to keep a friendly eye on one another when it comes to playing the position.

“I have watched several of Aaron’s games at the beginning of this year. I like how he has a physical approach at playing quarterback. He has a really smooth release on this throws and I think he’s a great all around quarterback,” said Bailey when speaking of McLaughlin.

It’s still very early in the developmental process for both McLaughlin and Bailey and any number of things can change before signing day January 2020.  However, the potential is through the roof on both quarterbacks and in six years perhaps this article can double as a crystal ball of some sort.