It’s been a wild spring for class of 2020 quarterback Harrison Bailey, and this morning, the train kept rolling along as he picked up his second verbal offer in as many months from the University of North Carolina. 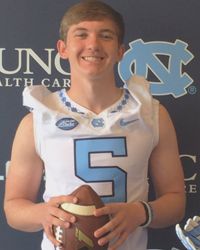 This is the second ACC School to offer Bailey, as Mark Richt and the University of Miami offered him in March. Bailey has also taken visits this spring to the Univeristy of Georgia, and the University of Alabama. The 6’3, 205-pound Bailey has long been considered one of the best quarterbacks in the country for the class of 2020, and he’s won just about every award there is.

“I was shocked when he gave me the offer,” said Bailey in a message to Youth1 this morning. “It means that I have to continue to work a lot harder and keep getting better and better everyday.”

“Coach Heckendorf told me he liked everything they have seen from me,” Bailey said. “From the camp I attended there last year to my film this year, they liked what they have seen.”

The young signal caller has had a chance to check out UNC before, and he really likes what the rising football program has to offer for him as a quarterback.

“I like North Carolina's coaches, and the atmosphere from the student body,” Bailey said. “It’s a very enjoyable place to be.”

Bailey has been a standout on the youth football scene for over two years. During the 2015 football season, he was named the number two overall player on the Youth1 Elite101 list, which ranks the top 101 players from each class.

Other awards that have come Bailey’s way during middle school include being named an EastBay All-American, being an FBU All-Top Gun First team performer, and receiving a recruiting profile from Rivals.

Blessed to revive an offer from North Carolina! #TarHeels pic.twitter.com/0NkMAqWyi8