It’s been a wild week for class of 2020 quarterback Harrison Bailey, but when you think about it, wild is normal for him, because he’s not your normal 8th grader. 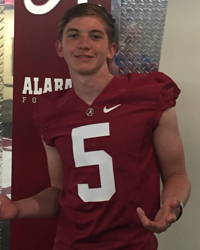 Over the weekend, Bailey took a trip to Athens, GA, for a visit with the Georgia football program, where he was able to meet some of the coaching staff, tour the facilities, and take in practice.

While most 8th graders would be thrilled with any college visit, that was just the first visit of the week for Bailey.

The Youth1 Elite101 member from Powder Springs, GA – who also holds a scholarship offer from the University of Miami – took a trip with his family Wednesday to Tuscaloosa, AL, to visit the prestigious University of Alabama football program.

“The visit went really good for me,” Bailey said. “It was crazy, the whole staff knew who I was and treated me like I was one of their own players.”

Bailey might only be finishing up 8th grade, but the Crimson Tide were already pulling out the big guns trying to impress the young quarterback.

Bailey got to take a tour of Alabama’s facilities and see what everything was about, and even try on some jerseys before watching a practice. They also had him sit down with offensive coordinator Lane Kiffin, where they studied some film together.

“He told me I could really throw a football and that he has watched my film and was really impressed with it,” Bailey said.

But perhaps the highlight of the event was when Bailey found himself sitting in an office inside the Alabama football buildings, talking to a man not many kids his age get to talk to – head coach Nick Saban.

“It was so unbelievable that I was sitting in his office and he was talking to me,” Bailey said. “He said he has never had an 8th grader in his office before, or watched film of an 8th grader. He talked about the process of being recruited and how I have to be a high character guy and work hard.”

It’s a testament to Bailey’s work ethic and skillset that he was able to sit down in a room and chat with Saban, because most high school players around the country never get that opportunity.

The Alabama visit was yet another milestone in the early success of Harrison Bailey, and it’s clear after his visit that the Tide are interested in what he has to offer as a quarterback. They made him a priority, and he came away impressed.

“Alabama would be a great place to play football. They have the best facilities that I have ever seen,” Bailey said. “I will be going back one of their camps where I could throw for them, so I will probably visit a couple more times this summer.”