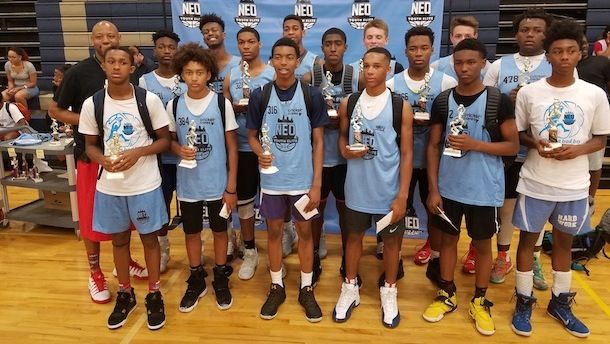 Day two of the NEO Youth Elite National Showcase got underway at 9 o’clock this morning at Garfield Heights High School. After a day full of drills and games, the kids got one last chance to showcase their talents. With multiple media outlets in attendance such as MSHTV, Slam Magazine and HoopDiamonds, these young players certainly had the opportunity to go viral.

One kid who made a name for himself was Jaythan Bosch. Bosch faced off against YouTube sensation Julian Newman and did not back down. The two went at it back and forth, exchanging buckets and crossing each other up. Bosch temporarily shut the gym down after he got passed Newman, put a second defender on skates and dropped in a floater.

Another highlight of the day was the dunk contest, which featured some high flyers including Randy Brady, Fred Mulbah and Alonzo Gaffney. It would be the 5’9 Mulbah who stole the show and got the crowd hyped with his performance.

Mulbah won the dunk contest by throwing down a one-handed ally oop, which he passed to himself but he wasn’t done just yet. He came back for an encore dunk, an in between the legs ally oop which sent the crowd into a frenzy. It really should not come, as much of a surprise after looking at some of his highlights, the kid is a serious athlete with some serious bounce.

The day ended with a series of all-star games in which the athletes were separated by their age. Below are the players who made the top 20 all star teams for the 6th, 7th and 8th grade.