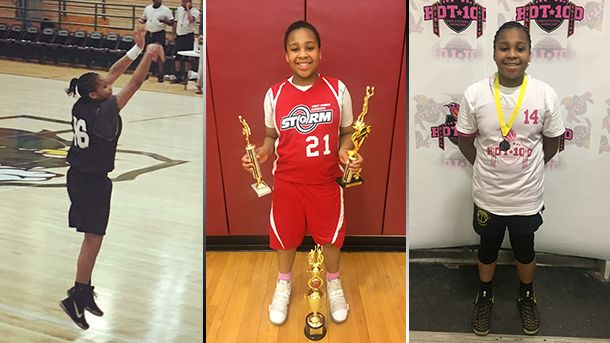 Judging by her “Baby Storrs” nickname, Zoe Brooks, like so many other young female basketball players, dreams of one day suiting up for the University of Connecticut.

If her recent level of success on the hardwood is an indication, an offer from UCONN is a realistic possibility in the future.

Brooks, a sixth grader from Plainfield, N.J., recently had an action-packed month of basketball.

On March 4 she attended the Hot 100 Middle School Showcase in Raleigh, N.C. where she competed against some of the top girls in her age group on the East Coast.  Brooks performed well in the individual stations and during the games and was selected for the all-star game and as one of the top 10 players.

“I liked Hot 100 because we got to play a lot of games,” Brooks said. “The coaches were nice and I learned a lot. I was the main point guard on my team so I always had the ball in my hands and got to show what I could do.”

Two weeks later, Brooks, who was the only female on the Holy Savior Academy sixth grade team, led her squad to the Metuchen Diocese Parish League championship.  She scored 37 points on a variety of drives to the rim and came up with a crucial shot block in the closing seconds of the three-point victory.

“Earlier in the season I scored 38 points but it didn’t mean as much as this did,” Brooks said. “We lost to this team before so I knew I had to be really aggressive and do whatever it took to help my team win the game.”

On April 2 Brooks played in the Elite Girls Basketball Middle School All American Games – which featured some of the best players from around the country. The event was held in Southlake, Texas and Brooks was chosen to play in a Class of 2023 game.

Brooks made the most of her limited offensive touches, making all four of her shot attempts, including a 3-pointer, on the way to scoring nine points. Her team won by 20.

“The All American Games was fun,” Brooks said. “I had a good experience. All of the girls there were really good and I can’t wait to go back next year and compete again.”

Brooks, a combo guard, who excels at ball handling and shooting, gives a lot of credit for her success to her trainer Eric Myrick.

“EMB (Eric Myrick Basketball),” Brooks said. “I do a lot of skill work with him and that makes me confident when I’m on the court.”