Darrell Green Jr. is one of the best players from the Redlands, CA area in the Class of 2024. 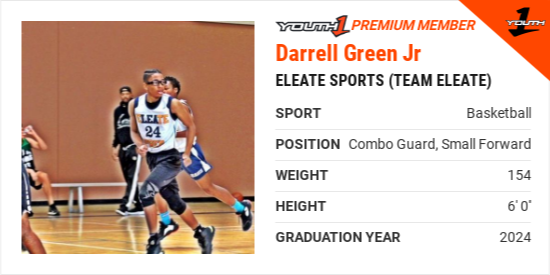 Green Jr. has earned plenty of recognition during his career, such as being selected MVP twice in middle school as well as attending the West Coast Elite Camp twice and making its top 20.

Green Jr. is humbled by the accolades.

“It was an honor to receive the awards but I like being a team player. The West Coast Elite Allstar Camps normally have about 200 players and to make the top 20 lets me know that hard work pays off,” Green Jr. said. “It was awesome. Making it to the Elite 20 was a great experience.”

Green Jr. has also attended Elite 80 and the MacDavid Camp. Last season, Green Jr. had a game in which he amassed 30 points, 10 rebounds, 3 blocks, 4 steals and 8 assists.”

No matter the opponent, every game Green Jr. is determined to give it his all.

Green Jr. is going all out.

The motor is always at full throttle whenever Green Jr. steps between the lines.

“Being a leader on the court but most important to me is defense,” Green Jr. said. “I average 3 steals and 2 blocks a game.”

Green Jr. has great passion and energy whenever he’s on the court. Green Jr. tells why he enjoys the game of basketball so much.

“What I love most about playing basketball is defense,” Green Jr. said.

Green Jr. has learned many valuable lessons from playing basketball that he applies to his everyday life.

“I have learned discipline and that life isn't easy,” Green Jr. said. “You have to put in the work in whatever you want to do in life.”

Green Jr. takes his role as one of the leaders on the team very seriously. Green Jr. makes sure he’s a daily positive influence on his peers.

“I've never been a selfish player. If I see you open you will get the ball. I average 8 assists per game but I also like to see my teammates shine,” Green Jr. said.

Green Jr. is appreciative of having amazing male role models that are supportive.

“The best advice I’ve gotten is to never argue with a player. Just let your game do the talking,” Green Jr. said. “Also to never give up.”

Green Jr. patterns his play after this late legend.

“I've been studying Kobe Bryant games on YouTube since I was 7 years old and I love how hard he works,” Green Jr. said.

Green Jr. lists math as his favorite subject in school.

Green Jr. is striving for greatness in all that he does.

“In high school I want to maintain a 4.0 GPA and try to be the best student I can be,” Green Jr. said.

Green Jr. describes what he believes separates himself from the pack.

“I’m always practicing fundamentals, work ethic, leadership and I’m able to play multiple positions,” Green Jr. said. “ I have a post up game, iso game, fade away shot and most importantly defense which I love to do.”