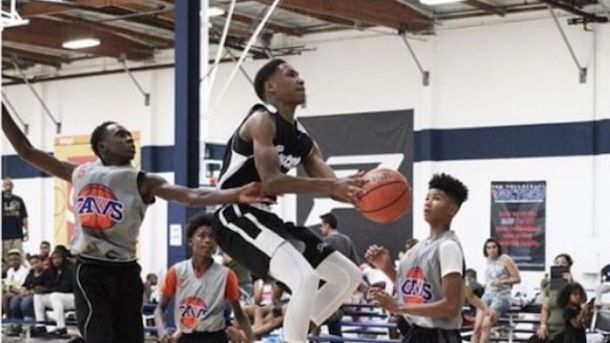 On a stacked Seattle Rotary basketball team filled with a plethora of talented athletes, coach Daryll Hennings doesn’t hesitate to proclaim who his best player is.

Hennings is a guru in the Seattle area, having coached numerous players that went on to the NBA such as Jamal Crawford, Nate Robinson, Marvin Williams and Zach LaVine.

He says Class of 2021 swingman Shane Nowell has the capability to one day ascend to those heights as long as he continues to work hard.

Hennings puts Nowell on a short list with Williams and Peyton Siva in terms of the most coachable players he’s dealt with.

“He’s our best player,” Hennings said. “And he’s one of the nicest kids that I’ve had the pleasure of working with in terms of how he treats other people and accepts teaching and instruction. His parents have done an incredible job with him.”

The 6-foot-3 lefty is long and wiry while also having a strong frame. Hennings says Nowell passes the proverbial eye test.

Hennings added that Nowell’s game reminded him of one of his players that was selected in the first round of the 2012 NBA Draft.

“He’s kind of Tony Wroten-like without the brashness. Tony talked a lot of trash and backed it up. Shane is the opposite,” Hennings said .”He’s just as tough, athletic but doesn’t have the cockiness. He just kind of plays.”

Basketball is in Nowell’s blood. Shane’s older brother Jaylen, a standout at Garfield High School, is set to attend the University of Washington next season.

“He’s watched the work ethic that his brother has put in,” Hennings said. “He has the template on what he has to do to get to the highest level and he’s been doing it.”

Nowell, who is going to Eastside Catholic for high school, is hoping to follow in his big brother’s footsteps and play for the Huskies as well.

The soft-spoken Nowell isn’t bashful about his hardwood dreams.

“I want to be the best I can be and be one of the best players to ever play in the NBA,” Nowell said.

Nowell is the type of rare athlete with the innate ability to make something out of nothing. It’s a trait that Hennings admits you can’t teach.

“He’s instinctual,” Hennings said. “He does things that you would say ‘Don’t do it like that.’ But he does it like that and it works for him.”

Nowell is an avid Russell Westbrook fan. He admires the relentless motor of the triple-double machine.

“The effort he puts in night in and night out is something I want to add to my game,” Nowell said.

When asked the strongest parts of his game, Nowell responded with his capability to drive to the basket, finding open teammates and crashing the boards.

Nowell said the part of his game that he needs to improve is on defense. The 13-year-old demonstrated an encouraging amount of self-criticism, which shows his commitment to getting better.

“My coach told me that I’m lazy sometimes and I can see what he’s talking about,” Nowell said. “Not trying to steal the ball too much because I reach too much from watching other players do it. It’s a bad habit.”

“He has good hands so he reaches a lot. He purposely lets guys go by him so he can back tip. That’s an art for him now. It’s a horrible habit to fall into but we’ve gotten so many run out layups because he does it so well,” Hennings said. “Defensively he doesn’t use his athleticism and length to his advantage all the time but we’re talking about a 13-year-old. He gives decent effort and he’ll get better at it as he goes to high school.”

Outside of that and developing his jumper, Hennings says Nowell already has the full package.

“Everything else he does at a high clip,” Hennings said. “He rebounds really well. He’s a freak athlete. He’s left-handed so it’s awkward for other players to defend him. He passes the ball really, really well. He just kind of has that ‘it’ factor.”

In addition to being an integral factor in the team’s productivity, Nowell is constantly demonstrating good sportsmanship.

“He’s an incredible team player. He wants to see the other guys do well. That’s kind of what he gets off on,” Hennings said. “When the worst guy on the team makes a basket he applauds louder than everyone. He gravitates towards the underdog guys and tries to help them do their part. That’s why a lot of kids like to play with him.”

Nowell constantly gives advice to his fellow teammates and motivates them through his positivity.

Nowell takes a page out of Hennings’ book when trying to be a leader.

Nowell has recently began dunking. His first slam was a one-hander on a fast break this year in a game for his school.

The modest Nowell was simultaneously excited and taken aback.

“I actually surprised myself because I didn’t know I could do it. I didn’t know I had that much in me,” Nowell said. “The crowd went crazy, especially my brother and my mom.”

To Hennings, when Nowell attacks the basket there’s nothing the defense can do.

“It’s pretty much unstoppable,” Hennings said. “He’s left-handed and can contort and he’s pretty strong. He just has a knack for finishing.”

Nowell is at his most assertive when there’s a fire lit under him.

“He’s pretty laid back by nature but if someone ticks him off he goes to the basket every single time after that. I kind of would like for him to be that way from the outset,” Hennings said. “I always joke with him that I’m going to pay somebody to slap him before the game so you’ll play mad from the beginning.”

Nowell has an attitude that will take him a long way. He embraces competition and is willing to do whatever it takes to help his team.

“I just take nothing for granted. I put in the effort,” Nowell said. “Even though, there’s a lot of people taller in the same grade I’m just competing to be one of the best at my position.”

Hennings is hard pressed to envision a future for Nowell that doesn’t include him playing at the highest level.

“He’s one of those guys that it would be hard for me to believe that he’s not going to be a Division-I player,” Hennings said. “...I can see him getting paid to play this game at some point.”