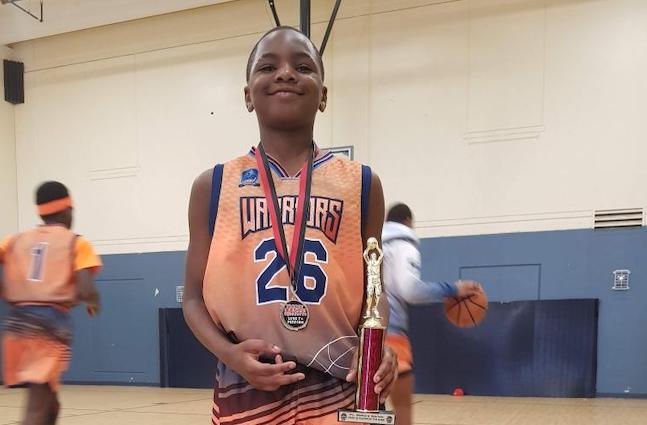 Khanye Moss is one of the best players from the Miami, FL area in the Class of 2026.

The 5-foot, 93-pound Moss, who attends Highland Oaks Middle, is a dynamic player that works as a point guard.

Moss has earned plenty of recognition during his career, such as: All-Star Golden Ticket invite, as well receiving MVP and All-Tournament selections.

Moss is humbled by the accolades.

“The awards mean a little bit to me and just make me want to work harder to get to the league,” Moss said. “It was a fun experience and very nice to play with people who want it as much as me.”

No matter the opponent, every game Moss is determined to give it his all.

Moss is going all out.

The motor is always at full throttle whenever Moss steps between the lines.

“My mindset is to facilitate the ball and make the right decisions,” Moss said.

Moss has great passion and energy whenever he’s on the court. Moss tells why he enjoys the game of basketball so much.

“Just playing the game gives me a rush to just play more and more and more,” Moss said. “It’s pretty fun to just get on the court and just play.”

Moss has learned many valuable lessons from playing basketball that he applies to his everyday life.

“Even if you’re down in the game, always keep your head up and play your hardest,” Moss said.

Moss takes his role as one of the leaders on the team very seriously. Moss makes sure he’s a daily positive influence on his peers.

“I demonstrate being a good teammate by keeping everyone’s heads up when we’re losing. Also, being respectful to my teammates is a number one for me always,” Moss said. “The best advice I give is probably before games. Sometimes I give pep talks to them to remind them in championship games to not lose ourselves on the court.”

Moss is appreciative of having amazing male role models that are supportive.

“Me and my coach have a very close friendship. He’s been there since I came to South Florida and sometimes he’ll pick me up to workout. He is just a good person overall, so it’s rubbing off on me to be a good one too,” Moss said. “The best advice I’ve gotten is to never be disrespectful on or off the court.”

Moss patterns his mentality after this standout.

“College ball I will say Josh Christopher,” Moss said. “He is a nice passer and scorer and can get to the hoop whenever he wants.”

Moss lists math as his favorite subject in school.

“My dream college is no one because I’ll take whatever offer I can get,” Moss said. “If it’s one of the top schools in the country, I’m thankful and will look more into it.”

Moss is striving for greatness in all that he does.

“My goals on the court are to go D-I and to the NBA,” Moss said. “Off the court my goals are to have a good family and give my mom a house and the best.”