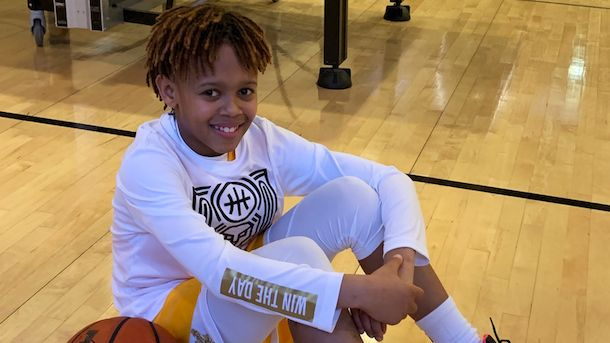 Peyton Kemp is a 10-year old point guard from Clinton Township, Michigan. Kemp may be young but basketball isn’t just a game for the 5th grader it is his passion. He was recently featured on an episode of No Days Off, a series produced by Whistle's YouTube Channel. The show features all kinds of different athletes with extraordinary talent and spirit.

Kemp is in a very unique situation; at just 10-years old he has amassed almost 50,000 followers on Instagram and is already securing brand ambassador deals with companies. However these things don’t effect him because he has one goal in mind, to one day play Division I basketball.

On the court Kemp has exceptional skill for someone not even in middle school, his handles and shooting ability are almost unfair against competition his age. His work ethic is another thing that sets him apart from the competition, Kemp is training 4 days a week and playing games on the weekend. He tries to model his style of player after NBA All-Stars Kyrie Irving and Steph Curry.

“I can play at a fast pace or slower but I prefer to get out and run.” Said Kemp. “I try to model my game after Steph and Kyrie because they both have a great Basketball IQ to go along with their scoring, shooting and dribbling ability.”

Off the court Kemp is like any other 10-year old, he likes video games, movies, skateboarding and going to the trampoline park. Tia Kemp, Peyton’s mother spoke about the importance of balance on Peyton’s episode of No Days Off.

Peyton is focused and motivated on reaching his goals, which ultimately include going to school and playing basketball. He is just as determined in the classroom as he is on the court. Ideally he would like to play his college ball at Michigan or Michigan State so his mom can see all of his games.