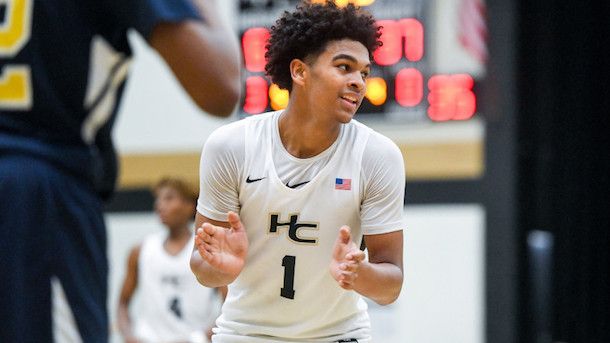 Skyy Clark is a 2022 combo guard from Los Angeles, California. Over the last few months he has quickly gained traction as one of the best young ballers in the country. He recently finished up his first year of varsity basketball at Heritage Christian School in Southern California, he was named league defensive MVP and invited to the Team USA Minicamp during Final Four weekend in Minneapolis.

Former NBA guard Gilbert Arenas even came up with a nickname for Clark after seeing him play, he referred to him as “Hibachi” because he can catch heat quickly…

Clark most recently made some noise this past weekend in Atlanta at the first Nike EYBL Session when he teamed up with Bronny James Jr. The dynamic backcourt will be fun to watch moving forward particularly because Clark and Bronny play a similar style of ball. They are both athletic, have elite handles/vision and are always looking to make the right basketball play.

Clark may be gaining national attention now but he has always been an outstanding athlete from a family known for athletics. His father played wide receiver for the Minnesota Vikings, his cousin is former Vikings quarterback Daunte Culpepper and his uncle is Steve Rhem, a former NFL wide receiver. He also has a younger brother ZZ Clark who is looking to follow his older brothers footsteps.

On the court Clark has been special his whole life, it really became obvious in 6th grade when Clark was a lot bigger and better than his competition. By the time he was in 8th grade he had the looks and game of a division I basketball prospect.

Although he still has a long way to go don’t be surprised to hear his name in the national conversation more and more as he develops through high school.