2019’s Parker Athearn wants to be the next Dwyane Wade

2019’s Parker Athearn wants to be the next Dwyane Wade 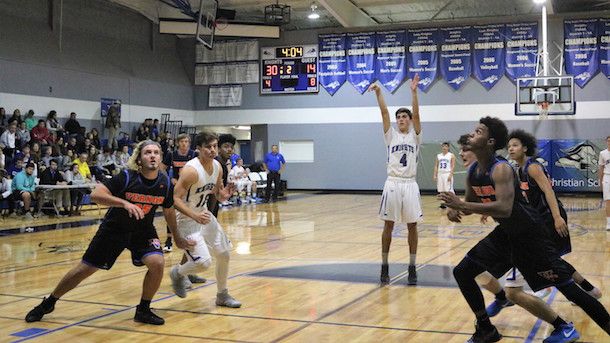 Parker Athearn is one of the best players from the Niceville, FL area in the Class of 2019.

The 6-foot-1, 154-pound Athearn, who attends Rocky Bayou Christian School, is a dynamic player that works as a point guard and shooting guard.

Athearn has earned plenty of recognition during his outstanding youth career, such as: All-Small School second-team honors, JV MVP and Offensive Player of the Year.

Athearn is humbled by the accolades.

“It's nice to be recognized for how I play, but honestly, I really just want to win games. I'd rather have to go out and do it,” Athearn said. “When we all work at 100 percent, there's no way we can lose.”

No matter the opponent, every game Athearn is determined to give it his all.

Athearn is going all out.

The motor is always at full throttle whenever Athearn steps between the lines.

“I am the leader of the offense. I control what we're all doing and what we have to do to score,” Athearn said. “I control the game. It's my job to set up my teammates and give them options. When we get sloppy, I need to be the first one to rewind and make sure.”

Athearn has great passion and energy whenever he’s on the hardwood. Athearn tells why he enjoys the game of basketball so much.

“I love the friendships that I have gained and the competition that we get to play during the season,” Murray said. “There’s nothing like being in the locker room after getting a big win and celebrating with your teammates.”

Athearn has learned many valuable lessons from playing basketball that he applies to his everyday life.

“When times are tough, you have to control your attitude. I have been prone to getting down on myself after a turnover, bad defensive possession, etc,” Athearn said. “You can either let that get to you and ruin your game, or you can grow from it and get better.”

“My favorite memory is scoring 27 points and winning against a district opponent,” Athearn said. “It felt great to see those shots fall against that team. That’s a memory I’ll never forget.”

“He has an engine that is full tilt,” Hubbs said. “When we are running sprints in practice he is always the first one to finish, which is great for me having a player who I can leave on the floor for an extended period of time and not see his productivity digress.”

Athearn takes his role as one of the leaders on the team very seriously. Athearn makes sure he’s a daily positive influence on his peers.

“I always try to be positive and tell my teammates that they can overcome anything if they keep their heads up. Make the next possession better. Make the next step better,” Athearn said. “Want it more. Especially in practice. Work as hard on every possession as you can. There should be no point in a game where we think ‘Man, I could've gotten that rebound.’”

Hubbs adds that Athearn is one of those consummate teammates that every squad needs to be successful.

“Parker is basketball smart but communicates well with his teammates,” Hubbs said. “It’s like having a second coach on the floor but he does a good job of relaying the message I want to get through and if he doesn’t understand something or wants to talk about strategy, he picks the right time to speak with me to fix a problem or try something that might work. He encourages the younger and older players.”

Athearn is appreciative of having amazing male role models that are supportive.

“Coach has encouraged us to be relentless. He wants us to be giving all of our effort in a game, in practice, and in the classroom. He is always encouraging me through

difficulties, whether I'm in a shooting slump or even when I worked super hard to get into a school that rejected me. He's been a great role model,” Athearn said. “One of my assistant coaches would always tell me, ‘You're a good basketball player. Don’t get in your head and play your game’ I would always get so freaked out about being benched for a mistake that I would never be as aggressive as I could be. This always makes me want to work hard.”

Hubbs is an advocate of Athearn’s capabilities.

“He stepped up in a huge rivalry game for us having 27 points, going 8-of-8 from the free throw line. His 27 points wasn’t just him jacking up shot after shot,” Hubbs said. “He played huge for us on defense causing a bunch of turnovers and when we needed him to control the game in the final two minutes he stepped up and was a senior point guard.”

In addition to making clutch plays, Athearn also has a high level of basketball IQ as well.

Athearn has excellent basketball awareness that puts him in position to thrive.

“He knows how to get to the basket. He is like a snake. You might think he is about to get blocked and he hits the breaks and takes a mid-range shot,” Hubbs said. “Speaking with him on the floor for me is fun because high school basketball players are usually on an add and subtract level. Parker is on a trigonometry level.”

Athearn is on the grind to perfect and hone his craft in any way possible.

“Anytime the gym is open he is trying to get in and work on his game. This offseason he worked really hard with the local college on fundamentals and getting better at little things that are going to add up to big things,” Hubbs said. “He came to me and asked when he can get in the weight room. Stuff like that separates the players you know are really serious about getting better at basketball. A lot of kids like playing the game but the way the game has evolved in the weight room sometimes the fun goes away and the kids lose the love of the game. But that’s not how he is.”

“I look up to Dwyane Wade,” Athearn said. “He's a great two-way player that can shoot and finish at the rim. I look up to the way he plays the game and how acts off the court.”

Athearn is constantly striving for greatness in everything that he does.

“I want to work hard in school and will eventually try to pursue a medical degree in college,” Athearn said.

Athearn lists Calculus BC as his favorite subject in school.

Hubbs outlines the areas of improvement that will take Athearn to the next level.

“Parker is a perfectionist and when things don’t go perfect we are working to rise above it and move on,” Hubbs said. “In a game this season that we won but had to grind it out, the locker room wasn’t satisfied and that was because of Parker. He knew we should’ve played better and being a senior leader he let the other guys know if we want to have a successful season we have to clean it up and continue to get better even if we just won.”

Hubbs believes the sky is the limit as long as Athearn continues to stay hungry.

“Parker can do anything he puts his mind to, so he has many avenues. Academics wise he has the ability to get into Duke,” Hubbs said. “If he wants to continue his basketball career in college it’s about finding the right fit which is great for him. I’m excited to see what the rest of his senior year holds for him and look forward to the great things he will do once he graduates.”