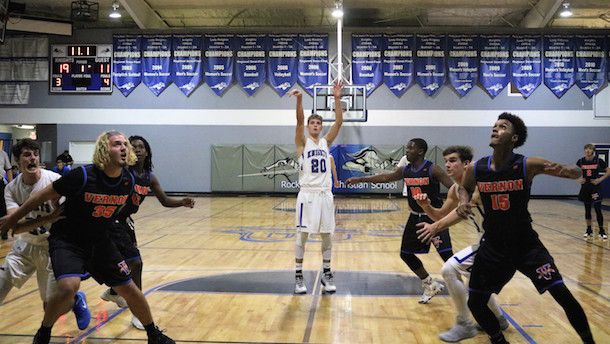 Joseph Grady Wright is one of the best players from the Niceville, FL area in the Class of 2019.

The 6-foot-3 Wright, who attends Rocky Bayou Christian School, is a dynamic player that works as a shooting guard.

Wright is humbled by the accolades.

No matter the opponent, every game Wright is determined to give it his all.

Wright is going all out.

The motor is always at full throttle whenever Wright steps between the lines.

“My mindset is to do whatever it takes to win and have fun doing it,” Wright said.

Wright has great passion and energy whenever he’s on the gridiron. Wright tells why he enjoys the game of basketball so much.

“I just love the game. I don’t know any one thing I love about it more than the next,” Wright said. “I have just always loved the game and enjoyed playing it.”

Wright has learned many valuable lessons from playing basketball that he applies to his everyday life.

“When we played K-Town one Saturday morning, and we had just gotten blown out the night before,” Wright said. “Thankfully, the game was different, and we changed our defensive game plan and won by double digits. I was so surprised and elated. It was the best feeling.”

“He can play all five positions. 1. Handles the ball well and good vision. 2. Great 3 ball but can take a guy off the dribble if need be. 3,4,5 big enough with good post up fundamentals to bang in the paint and out grit bigger players height and weight wise,” Hubbs said. “I like he is savvy enough to understand what our team needs in given situations and can adapt and excel at each spot giving our team flexibility. Communicates well with his teammates without having spent years growing up together. “

Wright takes his role as one of the leaders on the team very seriously. Wright makes sure he’s a daily positive influence on his peers.

“I try to always encourage my teammates on the court with positivity. If they make a mistake or have a bad attitude or off-court problems then I’ll take them aside and critique and talk to them privately. If my teammate falls I will help them up and I always have my teammates’ back on and off the court. A basketball team is a family, and I treat my teammates as I would my family,” Wright said. “One of my buddies in England was struggling with confidence and I told him he would only ever be as good as he allowed himself to be, and to keep shooting and keep his head in the game.”

Hubbs adds that Wright is one of those consummate teammates that every squad needs to be successful.

“He is positive and passionate but not an emotional player that relies on him scoring points to determine if he will play hard,” Hubbs said. “He has a great basketball IQ and uses it to encourage and teach his younger teammates bringing them along in the right manner.”

Wright is appreciative of having amazing male role models that are supportive.

“I have learned the importance of leadership on and off the court. Also I have learned that as a leader you set the tone of the whole team and so you have to hold yourself to a higher standard,” Wright said. “I have learned to have a short memory and keep shooting.”

Hubbs is an advocate of Wright’s capabilities.

“He stepped up huge in our season opener against a big physical opponent that required him to play defense at a high level for entire game,” Hubbs said. “But still had juice left late in the game to pull down gritty rebounds and sinking big shots both from long range as well as taking it to the hole and drawing contact. His scores came at clutch times.”

In addition to making clutch plays, Wright also has a high level of basketball IQ as well.

Wright has excellent basketball awareness that puts him in position to thrive.

“He is able to move without the basketball to create a passing lane for his teammates. Does a real good job handling the ball and creating shots or knowing when to take it to the hole,” Hubbs said. “He really understands game situations and how to adjust to strategy thrown at him from different defenses.”

Wright is on the grind to perfect and hone his craft in any way possible.

“It was refreshing meeting him because he reminded of myself when I was a player and other good players I have been fortunate to coach. Always wanting to get in the gym to work as well as hit the weight room,” Hubbs said. “Asks and takes suggestions of ways to improve his game. Really loves basketball and has a passion that you see on the next level.”

Hubbs explains why he compares Wright to this player.

“He’s like JJ Redick,” Hubbs said. “They both have adapted their games from not only a strong scoring threat but developed into more of a complete package.”

Wright patterns his mentality after this standout.

“My favorite basketball player at my position and all-time is Ray Allen,” Wright said. “I love him so much because of his work ethic and how he put in hours perfecting his shot before games and even practice. I love his passion for Christ, which I share. I love how pure his shoot is and I aspire to have a jumper that deadly. I stole his number too.”

Wright is constantly striving for greatness in everything that he does.

“Well, ultimately I want to glorify God and enjoy him forever. But practically speaking I want to finish college and find a job I enjoy and that will provide for me and if I have a family, them as well,” Wright said. “For this year, my goal is to win the district championship.”

Wright lists math as his favorite subject in school because of his teachers.

Hubbs outlines the areas of improvement that will take Wright to the next level.

“Getting accustomed to a new program,” Hubbs said. “He is very coachable and brings a high energy, positive attitude that is already linking in with his new teammates.”

Hubbs believes the sky is the limit as long as Wright continues to stay hungry.

“I believe college wise he could go to a wide area of schools and divisions due to his good grades and high basketball IQ, work ethic, and skill. There will be many options for him to establish a relationship with the right university and basketball program that fits best for both parties,” Hubbs said. “I’m looking forward to helping him develop for the short time I will have with him but have no doubt he’s going to be successful.”