2021 PG Khalil Brantley wants to be the next Russell Westbrook

2021 PG Khalil Brantley wants to be the next Russell Westbrook 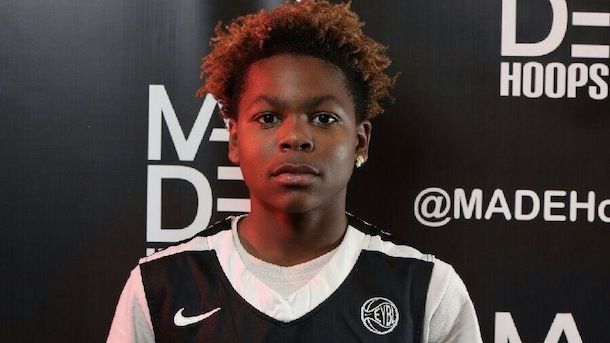 The 5-foot-9 Class of 2021 prospect certainly took his dad’s words to heart,  as he’s established himself as one of the best point guards in the country.

Brantley is currently in his second season for the NY Lightning, who just completed the second session of Made Hoops.

Brantley helped guide the Lightning to a 7-0 record, capped off by defeating Expressions Elite 71-69 in OT.

The floor general is averaging 10 points, four assists and three rebounds this season for the Lightning.

“Playing with the Lightning has been a fun experience with the different teammates I’ve had and the competition we’ve faced,” Brantley said.

“He’s the engine that gets us going,” Harrington said. “He sets the pace for the team on both sides of the ball.”

Coach Dre is proud of the strides the 14-year-old standout has made in his time with the Lightning.

Brantley is gifted at penetrating the lane and has a tenacious mentality defense. So it’s only fitting he patterns his game after NBA superstar Russell Westbrook.

“He plays like a ball of fire with a killer mentality,” Brantley said. “I really like the way he plays.”

Brantley lists his strengths as defending, driving to the basket, his mid-range jumper and leadership.

The latter is something he takes very serious when on the court.

“I’m a vocal leader,” Brantley said. “I tell my teammates where to be and in what places to go on the court. I’ve just been trying to get better every day and continue to bond with my teammates.”

An aspect of his game that Brantley considers a weakness is his outside shot. However, he’s been hard at work on improving his deep-threat abilities.

Before every game Brantley does a form shooting drill where he has to make shots from all over the court. As he’s grown more comfortable, the fastest Brantley has completed the exercise is five minutes.

Brantley, who also plays at North Ridge Middle School in Charlotte,NC, has been playing AAU basketball since the age of eight. In the second grade he was a part of the Metrolina Havoc, which captured the Division I AAU national championship.

While he was a valuable asset for the Havoc, it wasn’t until his father LaRoy created the WorldWide Wildcats that Brantley was given the opportunity to shine.

Ever since then he hasn’t looked back.

Brantley appreciated the chance to be on a team such as the Havoc but was ready to branch out.

“The team used to always just bring me in just for defense. Even if i did work hard in practice I was still a background player,” Brantley said. “So, I really had to move from that situation to do my own thing. That’s when I started being the person I am now.”

Brantley’s journey has also taken him to play for clubs such as the Atlanta Celtics, Playmakers and Team Penny’s Memphis Suns.

The eighth grader wouldn’t confirm where he’ll be attending high school next year, but his father hinted Brantley could be taking his talents to a certain state with year-round sunny weather.

Brantley himself has set some lofty goals for himself, wanting to play collegiately either at Duke, Kentucky, Kansas or UConn followed by a career in the NBA.

For Brantley his reasoning for setting the bar high is simple.

“I want to get paid to do something I love,” Brantley said.

His ambitions extend beyond the court though. Brantley also has an entrepreneurial spirit.

“When I get older I want to be a general manager or own my own business,” Brantley said. “If I can’t be in the NBA, I want to own my own team.”

If you ask his father, he’ll tell you that basketball has always been in Brantley’s blood. Being around his older brother Kevin (who plays football) as he traveled the country gave Khalil a preview at a young age to the kind of exposure he could receive.

His dad vows to continue to be the “driver” of Khalil’s budding career. If Brantley continues at this pace, the ride is sure to be a memorable one.

“It’s about putting you on that stage because you only get 15 minutes of fame,” Mr. Brantley said. “I truly believe that.”