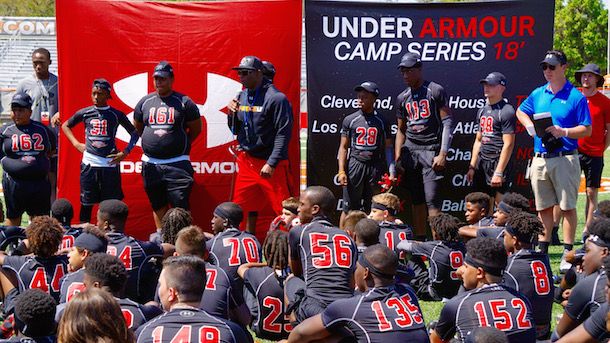 So when the Hall of Fame cornerback conducted a Q&A session on Saturday for parents at the middle school session of the Under Armour All-America Camp in Orlando, Prime Time didn’t waste anyone’s time.

The eight-time Pro Bowl player was in town with his son Shedeur, who competed in the high school portion of the camp on Sunday.

The 50-year-old Sanders, decked out from head to toe in red and black Under Armour gear, was playfully asked by a parent about coming out of retirement.

This led to the three-time Super Bowl champion flashing his trademark confidence.

Sanders, who worked with the defensive backs on Saturday and Sunday, answered a wide range of questions from the parents.

Here’s a sampling of the topics addressed by Sanders:

The value of being a multi-sport athlete

“Let them play everything because a coach that ain’t never done nothing but play one thing in his life is telling him to do one thing because he couldn’t do but one thing. That’s not fair to your child. You never know what your child could be.”

“It just so happens that I played football, baseball, basketball and I just ran track one day just to let everybody know I could beat all of them just off of strength. But I didn’t run track in high school because it was in baseball season. So I had more options.”

“I was a quarterback in high school. When I was at Florida State they said what do you want to play? I said, I think I’ll play corner. That feels pretty good to me. And the rest is history.”

“Texas is where 7-on-7 really originated. I’m a high school coach. If you play for me, you ain’t for playing nobody else’s 7-on-7 because they teach you that bull junk. You come back and get hurt you ain’t starting for me or playing for me. I’m not doing that. They’re trying to make 7-on-7 into AAU. Now the AAU coaches are having more authority than the head coach that’s kind of pickled. Because now whose teaching are you going by? Are you going by the team or your 7-on-7 coach? That’s a challenge. But that’s what they’re trying to do now.”

“Everybody is trying to come up with a 7-on-7 team because now it’s the same thing with basketball. Some shoes companies are paying the head coaches of the basketball teams in AAU. Now, the 7-on-7 coaches are trying to get their money. It ain’t nothing but an organized hustle, my brother. I would stick with my school. Workout with my school. Train with my school. Because that’s who I’m going to play for and that’s who I’m going to get an offer from hopefully and prayerfully at one of these camps. Different states attack it different ways. But ain’t nothing wrong with 7-on-7 if you’re really working on your game and if you’ve got some good coaches.”

The importance of athletes getting an education

“The number one question should be: ‘Are you going to be here? Because these coaches now are jumping and playing hopscotch now. They’re going to the highest bidder. So that’s number one.”

“Because if your kid gets there then another coaches comes in, that coach is probably not going to treat your son right because he didn’t recruit him. You’ve got to understand that. How do they plan on using your son? If your son don’t go pro, how is this institution going to help him with life? What is the academic plan for your baby?”

“There’s so many questions you need to pinpoint and have those questions answered concisely and precisely so they understand all those details.”

“You need to communicate with your babies and really get to know your babies. Monitor their social media. Y’all playing like y’all don’t see this mess. This stuff is real. It’s a pattern. When you see them liking all these half-naked pictures, the chances are that he’s going to get somebody pregnant sooner or later. Monitor your babies. Talk to your babies. Get to know them better. They’re changing right before your eyes.”

“Check out their friends. They’re not too far away from their friends. All of us are around the same age group, so you know what our parents used to say when we asked the question. They said: ‘Because I said so. He ain’t no good for you.’ They were telling the truth because they were bad influences. But now we are allowing that influence just because that friend is a good athlete.”

“Sometimes that takes tough love. You’ve got to be able to say no and stand by it. When they’re flunking or messing up in school, pull this away from them. You can’t smack them no more. They all know the number to CPS (Child Protective Services). I’m telling you from experience (Smiles). But what we can do is take that phone. Take that social media. That is all their connectivity to the world. Take the computer. Take everything away from them. They will go crazy when you take that away from them. Then they’ll act right.”

“These babies are youngsters. Let them have fun. When they get off the field, don’t get in the car and be like: ‘Man, I brought you way out here for this bull junk. I saw you out there doing this and that. Don’t do that.’ Build them up and then nicely say: ‘You know what son? On that route you just ran, just put your foot in the ground and come back. But you hustled and I’m proud of you, baby.’”