2026’s Errol Demontagnac is being compared to Ndamukong Suh

2026’s Errol Demontagnac is being compared to Ndamukong Suh 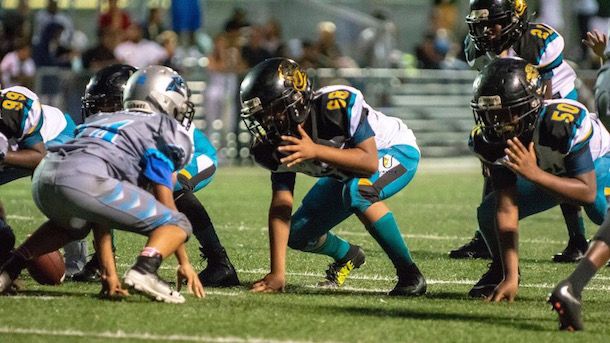 Errol Demontagnac is one of the best players from the Tampa, FL area in the Class of 2026.

The 5-foot, 140-pound Demontagnac, who attends Yates Elementary, is an imposing player that works as a defensive and offensive lineman for the Tampa Bay Jaguars.

No matter the opponent, on each snap Demontagnac is determined to give it his all.

Demontagnac is going all out.

The motor is always at full throttle whenever Demontagnac steps between the lines.

“My mindset is to do my job the best I can so I can help my team win games and to dominate the other side of the ball,” Demontagnac said. “I want to make the opponent have to work for everything they get.”

Demontagnac has great passion and energy whenever he’s on the gridiron. Demontagnac tells why he enjoys the game of football so much.

“What I love most about football is being able to be physical and tackle people,” Demontagnac said. “I enjoy the brotherhood and bonding that I share with my teammates. There’s nothing like being in the locker room after a win.”

Demontagnac has learned many valuable lessons from playing football that he applies to his everyday life.

“Football has taught me so much about life in general,” Demontagnac said. “It has taught me that you need to always work hard because that shows the kind of person you are off the field.”

“My favorite memories are from winning games and celebrating with my teammates in the locker room,” Demontagnac said. “Those are special moments I’ll never forget.”

Kellen Derr is in his first season coaching Demontagnac for the Tampa Bay Jaguars organization.

“He’s a very aggressive player. He dominates anybody in front of him. He’s a monster,” Derr said. “As far as his technique he’s pretty solid. His dad works with him a lot on it. The kid has great technique. To be a kid his size he has great feet. He’s a very athletic and agile kid. He stands out a lot.”

Demontagnac takes his role as one of the leaders on the team very seriously. Demontagnac makes sure he’s a daily positive influence on his peers.

“I always help my teammates by giving them advice if they don’t know how to do something or if we are learning something new I set a good example and show good sportsmanship,” Demontagnac said. “The best advice I’ve given one of my teammates is to stay focused at all times and always do your job in every moment you’re out there on the field.”

Derr adds that Demontagnac is one of those consummate teammates that every squad needs to be successful.

“I call him the Silent Assassin. He doesn’t talk but he shows leadership by his play on the field,” Derr said. “You can barely get a word out of him but he’s all action.”

Demontagnac is appreciative of having amazing male role models that are supportive.

Derr is an advocate of Demontagnac’s capabilities.

“We played a game a couple weeks ago against the Spartans and I made the move to put him back at defensive end. The kid totally shut down the whole side of the field. He was dominant in that game,” Derr said. “I can’t even remember how many tackles he had because it was that many. He made plays all day long.”

In addition to making clutch plays, Demontagnac also has a high level of football IQ as well.

Demontagnac has excellent football awareness that puts him in position to thrive.

“He’s a big kid so he knows when those fast guys come around, he knows where to be at. He makes sure they don’t get around him,” Derr said. “The kid can really use his frame and think while playing the game. I give the credit to his dad.”

Demontagnac is on the grind to perfect and hone his craft in any way possible.

“The kid comes out every day and works hard,” Derr said. “The stuff he works on at home carries over to the field. It really shows because his play speaks for himself.”

Derr explains why he compares Demontagnac to this player.

“Defensively he’s a lot like Ndamukong Suh,” Derr said. “The kid is a load to handle on the field.”

Demontagnac is constantly striving for greatness in everything that he does.

Demontagnac has his sights set on becoming a Miami Hurricane.

“They have an amazing football tradition there and I want to be a part of it,” Demontagnac said. “To win a national title at Miami would be very special.”

Demontagnac lists social studies as his favorite subject in school.

“You get to learn about different things around the world,” Demontagnac said. “I’m very interested in exploring how the world is in different cultures.”

Derr outlines the next areas of improvement for Demontagnac.

“He’s just got to keep being him and staying focused. Keep dominating every play to be that monster and to be that beast,” Derr said. “Athletic wise and talent wise he’s got it. He’s one of the best 9-year-old interior guys I’ve seen. He’s an imposing figure on the field. The kid has plenty of promise and potential for sure.”

Derr believes the sky is the limit as long as Demontagnac continues to stay hungry.

“I can you this without a doubt: if he keeps working hard and getting better his parents won’t have to pay for him to go to college,” Derr said. “I’m 99.99 percent sure of this.”