Damien Morgan is one of the best players from the Philadelphia, PA area in the Class of 2025.

The 5-foot-7, 138-pound Morgan, who attends Armstrong Middle School, is a dynamic player that works as a running back and safety. 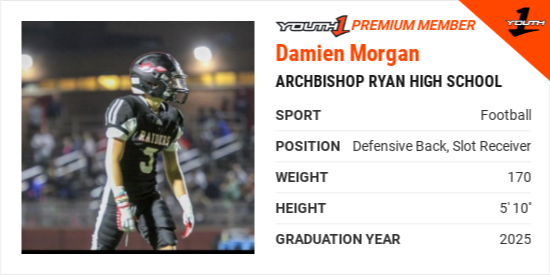 Morgan is humbled by the accolades.

“The individual awards are cool but the team championships are what I want to accomplish every time I step on the field with my team,” Morgan said. “It is fun to meet new people of such amazing talent and to match up against them. It makes me play harder.”

Morgan performed well enough at a regional event in NJ to punch his ticket to NextGen’s The Show this December.

“I'm super excited to showcase my ability down there in front of so many people,” Morgan said.

No matter the opponent, every game Morgan is determined to give it his all.

Morgan is going all out.

The motor is always at full throttle whenever Morgan steps between the lines.

“I believe I am in charge of the whole field on both sides of the ball when I am out there. I like to think of myself as a field general. On defense at safety I watched the whole field and read the play before it happened and most of the time it's like I know the play. It's an amazing feeling,” Morgan said. “On offense at RB I'm always on the move, sometimes in the backfield but sometimes in the slot or spread out wide. I can be dangerous anywhere on the field. I study the defense before the ball is snapped and when I get the ball my vision kicks in and it seems like everything is in slow motion, I just know where to run and when to move. It's a pure rush from whistle to whistle.”

Morgan has great passion and energy whenever he’s on the field. Morgan tells why he enjoys the game of football so much.

“I just love playing the game of football,” Morgan said. “What’s not to love?”

Morgan has learned many valuable lessons from playing football that he applies to his everyday life.

“I’ve learned to live life to the fullest each day,” Morgan said. “Don't take anything for granted.”

“My first long TD run at age 5. I knew I was fast but I didn't know how much faster than the kids chasing me so I remember the coach calling the play and all I wanted to do was not fumble. But when I saw an opening I ran through it and noticed I was  faster than the kids that were chasing me so I ran faster!” Morgan said. “Next thing I knew I was running 60 yards to the end zone with my dad and brother racing down the sideline cheering and screaming! It was an amazing moment that I'll never forget!”

Morgan takes his role as one of the leaders on the team very seriously. Morgan makes sure he’s a daily positive influence on his peers.

“There is no I in team. I learned that from my dad at a young age. We win as a team and lose as a team. I pick guys up when they have a bad play and praise guys when they have a good play. We all give our best every play and try harder the next play,” Morgan said. “My best advice is to give it all you got every play! Because that's what I'll be doing for you!”

Morgan is appreciative of having amazing male role models that are supportive.

“My coaches have taught me to respect your teammates and your opponents and the game and to give 100 percent every time you step on the field! That hasn't done me wrong yet!” Morgan said. “The motto is: ‘Clear Eyes, Full Hearts, Can't Lose!’”

Morgan patterns his mentality after this transcendent athlete.

“I look up to Saquon Barkley,” Morgan said. “He’s my favorite running back. He has great work ethic and he’s a great person.”

Morgan lists math as his favorite subject in school.

“I do a lot of speed drills, ladder drills, and wind sprints,” Morgan said. “And of course push ups and sit ups.”

Morgan is striving for greatness in all that he does.

“In high school I want to continue to learn from my coaches,” Morgan said. “Get stronger, get faster, and win a state championship!”

Morgan describes what he believes separates himself from the pack.

“My endless work ethic and my inability to give up,” Morgan said.