Kaden Hamilton is one of the best players from the Manchester, PA area in the Class of 2021.

The 6-foot-1, 180-pound Hamilton, who attends Northeastern Senior High School, is a dynamic player that works as a wide receiver and cornerback. 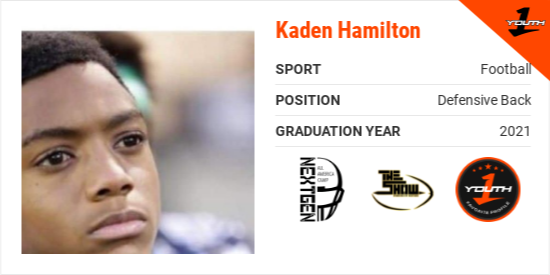 Hamilton has earned plenty of recognition during his career, such as: Mid Penn Midget All Star (2014), FBU All Star Top Gun (2017), selected for National Combine (2020) and selected by Offense/Defense as one of top defensive backs in country (2016).

Hamilton is humbled by the accolades.

“It means that I can compete against anyone,” Hamilton said. “It was awesome and very humbling to compete in those events.”

Hamilton has been selected for the following camps: FBU, Top Gun, NextGen The Show,, USA Football and Offense/Defense.

No matter the opponent, every game Hamilton is determined to give it his all.

Hamilton is going all out.

The motor is always at full throttle whenever Hamilton steps between the lines.

“My mindset is don’t get beat, and score on every opportunity,” Hamilton said.

Hamilton has great passion and energy whenever he’s on the field. Hamilton tells why he enjoys the game of football so much.

“What I love the most about football is the contact,” Hamilton said.

Hamilton has learned many valuable lessons from playing football that he applies to his everyday life.

Hamilton takes his role as one of the leaders on the team very seriously. Hamilton makes sure he’s a daily positive influence on his peers.

“I demonstrate being a good teammate by being very positive, upbeat, and supportive,” Hamilton said. “The best advice I give is to move on to the next play.”

Hamilton is appreciative of having amazing male role models that are supportive.

“I’ve learned from my coaches to set an example for the team,” Hamilton said.

Hamilton patterns his mentality after these standouts.

“Stefon Diggs because he runs precise routes and he is quick,” Hamilton said. “Jalen Ramsey because of his approach to the game.”

Hamilton lists science as his favorite subject in school.

“I do dips and pull-ups with weights,” Hamilton said. “Also, single leg squats.”

Hamilton is striving for greatness in all that he does.

“My main goal is to be selected All-State,” Hamilton said.

Hamilton describes what he believes separates himself from the pack.

“My height, footwork, quickness and speed,” Hamilton said. “Also my ability to attack the ball and catch.”