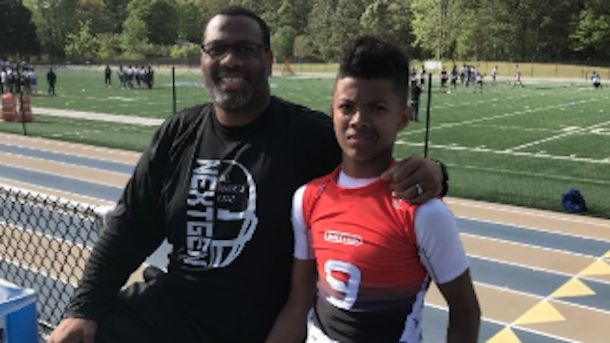 Among the elite youth QB prospects around the country, 2024's Kamari McClellan is proving that he may be the creme the crop from his class. The Alabama native has developed a reputation for his supreme throwing ability.

At the recent NextGen Atlanta Showcase, McClellan was named as an MVP for his impressive performance at the event.

"It definitely was a great feeling, it felt good. I’m glad I went out there and competed," McClellan told Youth1.com of winning the MVP award.

"I wanted to show the NextGen coaches, I GOT BETTER!"

McClellan also received a golden ticket invitation to NextGen's invite-only main event, The Show. This will be McClellan's second time competing at The Show, as he competed in last year's The Show in Atlanta, GA.

2019's The Show is set to be at IMG Academy in Florida this June.

McClellan is ready to show that he's taken another step forward in his game and is excited to play at the prestigious IMG Academy.

"That was a great feeling finding out I was among the first 50 invited. The only 7th grade QB on the list out of nine," McClellan said.

"It was an honor to be put in that group of elite players," he added.

Standing at 5'10" 141 lbs., McClellan throws a beauty of a football and serves as a real leader on the field. His ability to make all the throws at his age is what makes him such a tantalizing young QB.

He's known from a young age he was destined to play Quarterback. He enjoys leading his team on and off the field.

"I get to lead by example. I have always had a strong arm since I was 5 so my dad knew already I was a QB," McClellan said.

"Over the years I’ve learned so much. I enjoy everything about the QB position," he added.

McClellan was named to Youth1's Next Up Watchlist last fall. Our Next Up Watchlist identifies the budding young talents from the 7th grade. McClellan continues to prove he was worthy of being named to that list. He believes his game is coming along very well.

"I’m getting taller. I’m 5'10" now and the game is speeding up. That's because I’m playing with high school players and I’m just a 7th grader," McClellan said.

"Reading coverage is becoming not so hard now. My speed and quickness are getting better by the week. My plan is to keep working," he added.

Taking home the MVP award at the NextGen Atlanta Showcase is a noteworthy achievement for any youth athlete. For McClellan, it's a testament that his hard work and dedication to his craft is paying off.

"Throwing on the run, on platform throws, deep balls, intermediate passes, crossing routes and running when needed," McClellan said of his strengths on the football field.

He plans on working on his pre-snap reads and film breakdown as he looks to take his game to even greater heights.

2024 QB Kamari McClellan is getting better by the day and is putting the world on notice that he's coming. After being named MVP at NextGen Atlanta, McClellan is even more steadfast in his desire to be great.

He's ready to continue to put the work in.

"I will outwork my competition. Everyday my goals is to be better than yesterday," he said.

For more on Kamari McClellan, check out his Youth1 Player Profile -> here.