2024 QB Kamari McClellan named to Youth1's Next Up Watchlist

2024 QB Kamari McClellan named to Youth1's Next Up Watchlist 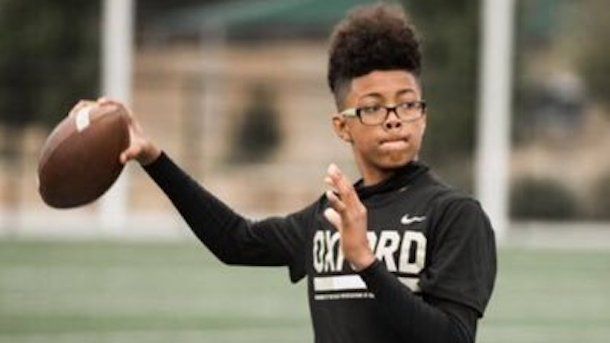 Among the standouts from the 2024 class named to the Next Up Watchlist is QB Kamari McClellan.

McClellan is one of 2024's rising stars and is making a name for himself as one of the best 7th grade prospects in the country.

"The game, the leadership, the contact, the decision making, the fans, and everything that comes with it," McClellan said of his favorite part of playing football.

Standing at 5'8" 132 lbs., McClellan is a QB that plays beyond his years. He can make all the throws. He shows great touch on deep balls and precision on intermediate passes in tighter windows. He can make throws from the pocket or while on the move. Give McClellan time to make his reads and he'll pick the defense a part.

McClellan isn't just an offensive player either, he makes an impact at Linebacker or Safety on defense and also plays Special Teams.

"I’m great passing on the run and throwing on rhythm," McClellan said when asked about his strengths.

McClellan's talent has given him the opportunity to make an impact at some of the nation's top youth camps and combines. Some of his recent successes include being named MVP at 5 different events this past summer.

"All camps I received MVP was in Atlanta where I think the best competition is," he added.

These accomplishments are impressive for an athlete so young. It's no surprise the Kamari McClellan was one of Youth1's early selections for the Next Up Watchlist.

"...hopefully I can make every watchlist from this point on," he added.

"I’m a better passer then ever now. I’m making faster reads where the balls are on perfect timing. My balls are piercing with energy with great ball placement. I’m at a place where I’m reacting and not thinking," McClellan said of his progression.

The Next Up Watchlist is only the first step for McClellan, as this recognition will serve as the first of many he'll likely receive from Youth1. He'll be eligible for the Elite101 rankings next year as an 8th grader.

He's dedicated to taking his game to the next level.

"Get stronger in the weight room and maybe some training on my speed that would also help my game a lot. Also, being more verbal with my teammates and working hard in the film room," McClellan said.

"I’m preparing by working hard with my Trainers Quincy Avery and Sean McEvoy who are the best. My dad and I always hit the field when we’re not with my trainers just about every week. I love to compete so I’m always preparing to be the best on and off the field," he added.

2024's Kamari McClellan is one of the top youth QBs in the country. His ability to take over a game with his throwing ability is lethal. He's dedicated to making the most of his God given abilities.

Just know, Kamari McClellan is next up.

To view the entire Next Up Watchlist click -> here.

For more on Kamari McClellan, check out his Youth1 player profile -> here.