2023 RB/WR Jaylon McKenzie puts on impressive performance at the UA Next Game in Orlando, FL | Youth1
Skip to main content

2023 RB/WR Jaylon McKenzie puts on impressive performance at the UA Next Game in Orlando, FL

2023 RB/WR Jaylon McKenzie puts on impressive performance at the UA Next Game in Orlando, FL 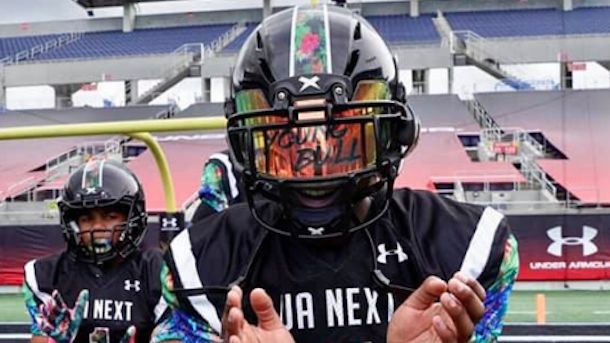 Among the brightest young stars at the event was 2023 RB/WR/DB Jaylon McKenzie, who came to the UA Next Game ready to show and prove.

The Belleville, IL native is a rising star with big time ability on the football field. He made play after play during the UA Next Game, helping to catapult Team Reed to victory.

Standing at 5'8" 150 lbs., McKenzie is a versatile playmaker that makes an impact from a variety of spots on the field. He can lineup in the backfield as a runner to make plays with his speed and quickness or as a WR.

"I enjoy playing running back because of my vision and my ability to see the field in a way others can’t," McKenzie told Youth1.com.

"As a receiver, I enjoy getting in and out of my routes with quickness and using my speed to run the routes. What I enjoy most about being a cornerback is using my receiver skill set to defend the ball," he added.

McKenzie mainly played receiver during the UA Next Game, catching a handful of passes and making big plays for Team Reed.

In a game full of rising stars, McKenzie shined among the brightest.

"I feel I performed well. I just tried to go out and do my best. I feel like I showed up and made big plays when my team needed me to," McKenzie said.

"With my mom being hospitalized a few hours after we arrived in Florida, I knew I had to stay focused and play for her," McKenzie said.

"My mindset is always to put points on the board because that’s what win football games. You can’t win if you can’t score," he added.

Being invited to participate in the UA Next Game event is a prestigious honor that only a select number of 8th grade athletes receive. McKenzie explains that the feeling he got on game day is nearly indescribable.

"The experience was phenomenal. Being able to meet some of the best high school players in the country was fun and play with some of the best 8th graders was second to none," McKenzie said.

"My favorite part of the event was game day. That game day feeling is one that just can’t be explained," he added.

2023 RB/WR/DB Jaylon McKenzie shined bright at the UA Next Game in Orlando, FL. His ability to make plays helped Team Reed take home the victory. McKenzie continues to prove that he's among the elite talents from his class.

His rise will be a joy to follow from here.

For more on the UA Next Game, check out the Top Performers -> here.

For more on Jaylon McKenzie, check out his Youth1 Player Profile -> here.