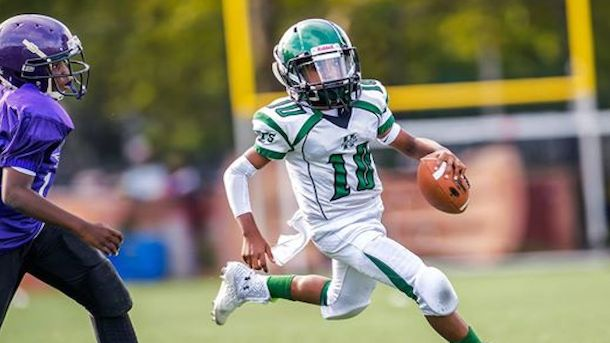 The 2023 class is rich with talent at a variety of positions, with quarterback being among the most fruitful. Among the rising QB talents from the 2023 class is Quran Ali, who is one of NJ's top youth athletes.

The Union, NJ native is a real threat from the pocket with the ability to dice up the defense with his arm. He's a smooth throwing lefty, that throws the rock with real precision.

He most recently starred as the QB of the Brick City Lions of Newark, New Jersey.

"I enjoying playing Quarterback and trying to lead my team to victory," Ali told Youth1.com about his favorite part of playing football.

Standing at 5'7" 125 lbs., Ali is an accurate passer that makes tough throws with ease. Give him time in the pocket and he'll deliver passes to his receivers right on the money. He has good arm strength to drive the ball down the field as well.

Ali believes his strengths on the field are his ability maintain poise throughout the game and effectively lead his team.

He's had his fair share of success on the field.

"I have won the Andre Millner award, which is the highest honor "like the Heisman Trophy" in the Harlem Jets Org. and Offensive Player of the Year from the Harlem Jets and MVP honors with the Secaucus Patriots, NJ. I've played in 5 Championships/Super Bowls," Ali said.

"My most recent success was playing and capturing the North Jersey 2018 Pop Warner Championship," he added.

As he aims to continually improve his game, Ali plans on attending camp series like Under Armour and NextGen to help hone his craft. He also plans on working on the mental aspect of the game, such as reading defenses.

"This past season I focused on learning how to read defenses to prepare for high school football," Ali said.

Like any young QB, Ali looks up to one of the NFL's best threats from the pocket.

"My favorite QB is Cam Newton because he's one of the hardest workers in the NFL. He works day in and day out on how he can re-invent himself on the field. You can tell this by the confidence he plays with. You can throw him into any situation and he will succeed," Ali said.

2023 QB Quran Ali is a young talent with loads of potential. He can really throw the ball well and is the type of young athlete who enjoys leading his team.

For more on Quran Ali, check out his Youth1 Player Profile -> here.