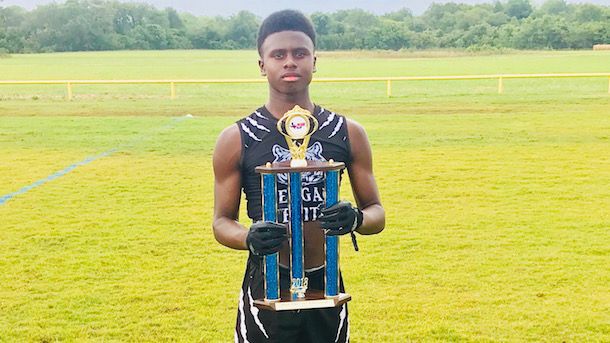 Andrew Alexander is one of the best players from the Houston, Texas area in the Class of 2022.

The 5-foot-10, 150-pound Alexander, who attends Summer Creek High School, is a talented player that works as a quarterback, wide receiver and cornerback.

Alexander has played for these teams during his outstanding youth athletic career:

Alexander has earned plenty of recognition such as:

- 8th Grade Male Athlete of the Year - The Lion Award

Alexander is humbled by the accolades.

“I am humbled and honored to be recognized for my hard work. It inspires me to keep working hard at being a better teammate and player,” Alexander said. “It was great to compete against elite athletes across Texas and on a National Level.  I used the platform to evaluate how I measured up and what my opportunities for improvement were.”

No matter the opponent, on each snap Alexander is determined to give it his all.

Alexander is going all out.

The motor is always at full throttle whenever Alexander steps between the lines.

“My mindset at quarterback is to be the best leader that I can be.  I also enjoy finding ways to put my team in the best position to win,” Alexander said. “Depending on the situation, this can be with my arm or my legs.”

Alexander has great passion and energy whenever he’s on the gridiron. Alexander tells why he enjoys the game of football so much.

“I love making big plays for my team, competing and winning!” Alexander said.

Alexander has learned many valuable lessons from playing football that he applies to his everyday life.

“I learned to lead from the front, be vocal, and to work hard every day at getting better,” Alexander said.

“Making a one-handed interception during a 7on7 game that prevented the opposing team from scoring and secured the victory for my team, TFW Bengals,” Alexander said.

Wayne Edwards has coached Alexander for one year with the Texas Footwork Bengals.

“At quarterback, he has significant arm talent and can make every throw. At wide receiver, he is very athletic with great highpoint ball skills in traffic. At cornerback he is long and athletic with good balls skills,” Edwards said. “At quarterback, he makes good reads in sync with his footwork. At wide receiver it is his transition out of breaks well with good hands. At cornerback, it is his good hip movement and man-to-man coverage skills.”

Alexander takes his role as one of the leaders on the team very seriously. Alexander makes sure he’s a daily positive influence on his peers.

“I demonstrate being a good teammate by uplifting my teammates in all situations.  I never talk down to my teammates after a bad play. This will never help the team succeed,” Alexander said. “As I learn techniques from my QB trainer, J.P. Tillman, I share information with younger QBs.  One of the best ways for me to learn is to teach others.”

Edwards adds that Alexander is one of those consummate teammates that every squad needs to be successful.

“Andrew is a quiet leader that leads by example,” Edwards said. “That attitude is contagious and rubs off on the rest of the team in a positive manner for sure.”

Alexander is appreciative of having amazing male role models that are supportive.

“I learned to lead from the front, be vocal, and to work hard every day at getting better,” Alexander said. “Don’t be afraid to step up and lead and to take the initiative.”

Edwards is an advocate of Alexander’s capabilities.

“Andrew has made key plays from all three positions including one of the biggest highlights of the season, a one handed interception in zone coverage,” Edwards said. “Andrew also made key throws in the championship game of the Texas Elite 7 on 7 tournament including an outstanding drive resulting in a go ahead touchdown in the game.”

In addition to making clutch plays, Alexander also has a high level of football IQ as well.

Alexander has excellent football awareness that puts him in position to thrive.

“Andrew is a very intelligent football player that uses his understanding of the game to make plays at all positions and shows growth throughout a game,” Edwards said.

Alexander is on the grind to perfect and hone his craft in any way possible.

“Andrew has very good work ethic and is extremely coachable,” Edwards said. “He trains at Texas Footwork and works with a separate quarterback trainer to hone his craft.”

Edwards explains why he compares Alexander to these pros.

“He’s a lot like Dak Prescott, Keenan Allen and AJ Bouye,” Edwards said. “At each position, he has the skill set of each of them.”

Meanwhile, Alexander patterns his demeanor after these standout.

“At the QB position, I look up Justin Fields, QB at University of Georgia.  He is great at reading defenses and he has a quick release. Justin is also a dual threat QB who can use his legs to extend the play,” Alexander said. “I look up to Julio Jones at the WR position.  He runs great routes and knows how to get separation from DBs. He also does an excellent job at high pointing the ball.”

Alexander is constantly striving for greatness in everything that he does.

“My on the field goals are to make the varsity team and lead my Summer Creek Bulldog team to a Texas state championship,” Alexander said. “Off the field, I want to continue my strong academic performance, graduate in the top 10 percent of my class and find new activities that I am passionate about.  Earning a full scholarship to Stanford would be awesome.”

Before the pros, Alexander dreams of being the next great star at Stanford.

“Because of the high academic standards and a great football program with a rich history of players going to the NFL,” Alexander said. “Additionally, Stanford has an excellent engineering program and I want to study chemical engineering. A Stanford degree will open many doors after graduation.”

Alexander lists science as his favorite subject in school.

Edwards outlines the next areas of improvement for Alexander.

“He needs to trust his instincts and reads and assert himself as a leader because he has all the tools necessary to carry a team as a quarterback,” Edwards said. “He is working on his leadership and developing into a confident signal caller.”

Edwards believes the sky is the limit as long as Alexander continues to stay hungry.

“Andrew is definitely a Division I, Power 5 prospect with the athletic ability and academic performance to play for a major program,” Edwards said.