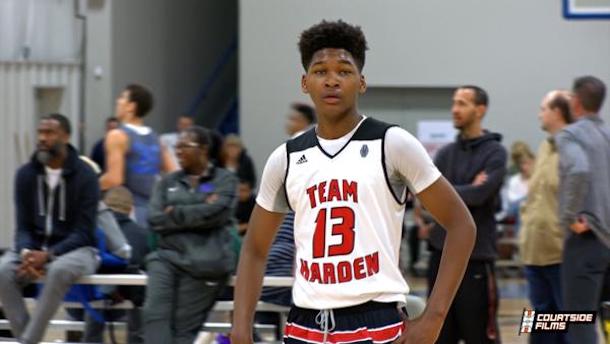 This past weekend Griggs played up on the 2020 circuit for Team Harden down in Houston, Texas. The 14-year old had no problem with the bump in competition as he averaged 20 points, 6 assists and 4 rebounds per game against mostly 16 and 17-year olds.

Griggs plays like a true point guard facilitating and controlling the tempo of the game. His biggest strengths are his elite ball-handling skills along with his ability to make plays, whether that be scoring or finding the open man. Griggs definitely uses his size and physical strength to his advantage, he has no problem finishing through contact and sizing up for position.

If you were going to criticize any part of Griggs game it would be his ability to consistently knock down his jump shot. In today’s game a point guard’s ability to score is just as important as his ability to create for others. Griggs is well aware of this; he has definitely improved shooting the ball from three, off the dribble and has even shown the ability to hit mid-range jumpers.

Griggs has been atop of the 2022 rankings for a while now and it looks like that isn’t going to change anytime soon. The talented 8th grader has already received some interested from schools such as Houston, Baylor and Texas A&M.

If he can continue to shine against older, tougher competition while improving his game, a division I offer is definitely in his near future.