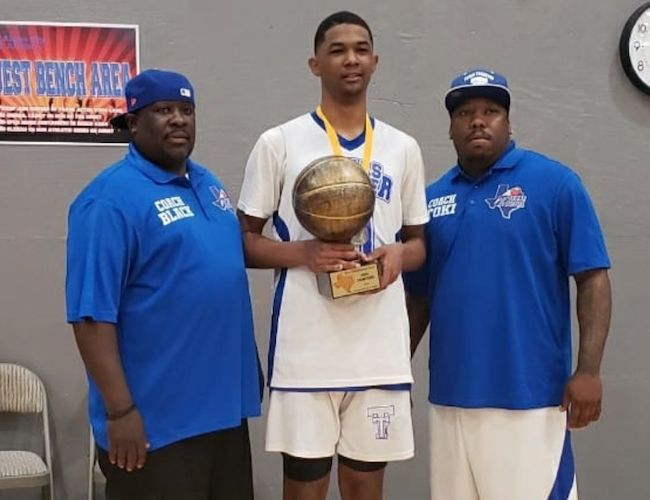 Clovis McCain Jr. is one of the best players from the Houston, TX area in the Class of 2023.

The 6-foot-4, 270-pound McCain Jr. is a dynamic player that works as a small forward and power forward. 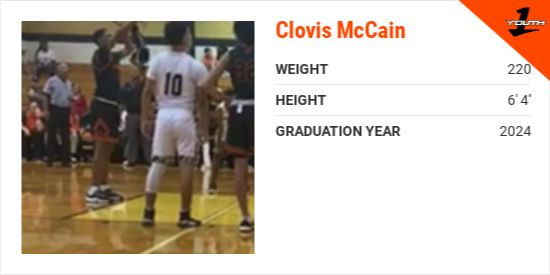 No matter the opponent, every game McCain Jr. is determined to give it his all.

McCain Jr. is going all out.

The motor is always at full throttle whenever McCain Jr. steps between the lines.

“My mindset at my position is to score and always play defense,” McCain Jr. said.

McCain Jr. has great passion and energy whenever he’s on the hardwood. McCain Jr. tells why he enjoys the game of basketball so much.

“I love playing because it’s like my livelihood,” McCain Jr. said.

McCain Jr. has learned many valuable lessons from playing basketball that he applies to his everyday life.

“My mom, my dad, my grandparents, my great uncle, and Coach Mason taught me to never cheat myself because what you do in the dark will come to light,” McCain Jr. said.

“My favorite memory is when I had 41 points in nationals,” McCain Jr. said. “It’s my favorite because it’s the most points I’ve ever scored in my career.”

“He can do it all. He can handle the ball, shoot, rebound, defend, run the floor, and dunk,” Lewis said. “He can spread the floor. He has an inside and outside game and is very long.”

McCain Jr. takes his role as one of the leaders on the team very seriously. McCain Jr. makes sure he’s a daily positive influence on his peers.

Lewis adds that McCain Jr. is one of those consummate teammates that every squad needs to be successful.

“His leadership is no question,” Lewis said. “He’s a great leader to our team. All the guys love him. When he’s serious and comes to play, nobody can stop him.”

McCain Jr. is appreciative of having amazing male role models that are supportive.

“I’ve learned to be a better person by getting my grades first and school always comes first before anything,” McCain Jr. said. “I’ve learned offense never wins games. Defense does.”

Lewis is an advocate of McCain Jr.'s capabilities.

“He’s made some big plays,” Lewis said. “He’s knocked down game-winners and got defensive stops for us.”

In addition to his playmaking skills, McCain Jr. also has a high level of basketball IQ as well.

McCain Jr. has excellent basketball awareness that puts him in position to thrive.

“He has a good IQ for the game,” Lewis said. “He’s a special kid that can do it all. Let’s just say he’s the Tom Brady of basketball.”

Lewis explains why he compares McCain Jr. to this standout.

“I would compare him to Anthony Davis,” Lewis said. “He has the size and can spread the floor and knock down the shot and finish around the rim.”

McCain Jr. explains who he patterns his mentality after.

“I look up to my brother because of how far he made it and graduated from college,” McCain Jr. said. “I also look up to Kevin Durant because of the work ethic he has always had. He’s just inspired me.”

McCain Jr. lists math as his favorite subject in school.

McCain Jr. is striving for greatness in all that he does.

“My goals off the court are to make straight A’s and graduate in the top 10 percent of my class,” McCain Jr. said.

“My dream college is UConn,” McCain Jr .said. “I just love the school and I've been liking them since 2014.”

Lewis lists the improvements that will take McCain Jr.’s game to the next level.

“Shooting needs improvement but he’s in the gym every day to get better,” Lewis said. “Plus he’s a freshman starting on varsity basketball for Texas City High School.”

Lewis believes the sky is the limit as long as McCain Jr. continues to stay hungry.

“He’s a young player that has the potential to be great,” Lewis said. “He will be a four-year starter on varsity and we will see him in the NBA one day.”