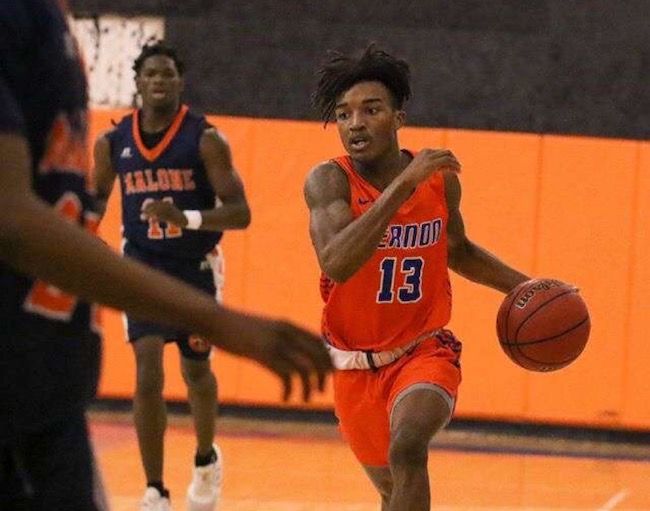 Dyvion Bush is one of the best players from the Vernon, FL area in the Class of 2021.

The 6-foot-1, 175-pound Bush, who attends Vernon High School, is a dynamic player that works as a point guard, shooting guard, and small forward. 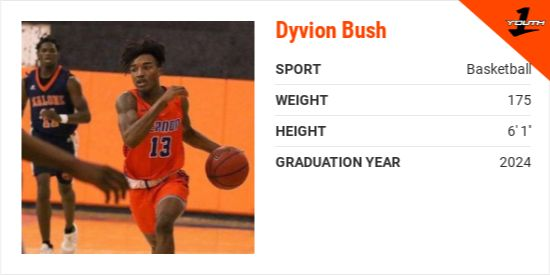 No matter the opponent, every game Bush is determined to give it his all.

Bush is going all out.

The motor is always at full throttle whenever Bush steps between the lines.

“I try to move the ball first and if it comes back see what I have to either drive or shoot,” Bush said.

Bush has great passion and energy whenever he’s on the hardwood. Bush tells why he enjoys the game of basketball so much.

“I love when someone talks trash,” Bush said. “It makes me hungrier to play. It’s like adding fuel to fire and playing my game keeps me out of trouble.”

Bush has learned many valuable lessons from playing basketball that he applies to his everyday life.

“Playing has taught me that if you don’t have respect for others then you will not be respected on or off the court,” Bush said.

“My favorite memory is when I scored 29 points against Holmes County when our starter Darrell Powell was out,” Bush said. “I had to pick up his slack and then some.”

Thomas Register is in his fourth year coaching Bush at Vernon High School.

“He can guard anyone on the court. It doesn’t matter who we play, Bush is guarding the best player. Offensively he can shoot and drive,” Register said. “Over the past two years he has worked on his ability to drive and finish at the rim. He is one of the best drivers on the team now.”

Bush takes his role as one of the leaders on the team very seriously. Bush makes sure he’s a daily positive influence on his peers.

Register adds that Bush is one of those consummate teammates that every squad needs to be successful.

“He is one of the leaders of the team,” Register said. “He always works hard and does everything asked of him. He is also a leader in the classroom, consistently making the honor roll.”

Bush is appreciative of having amazing male role models that are supportive.

“‘I’ve learned whatever you do off the court will carry over on the court, so treat everyone right and keep God first and treat everyone with respect. Last but not least, hustle,” Bush said. “Never give up and keep your head up and lead. They tell me all the time I’m a leader and not a follower.”

Register is an advocate of Bush’s capabilities.

“This year when we played rival Chipley, he held their leading scorer to 0 points in the first half and 2 in the second,” Register said. “His defensive performance helped lead us to our 4th straight victory over our rivals.”

Bush has a growing basketball IQ that helps him thrive.

“His IQ is one of the best parts of his game,” Register said.”He watches more film than any other player on the team. He is always ready for the next opponent.”

Bush is on the grind to perfect and hone his craft in any way possible.

“He is a multi sport athlete so he is training year around,” Register said. “He has added 25 pounds of muscle in the weight room and really improved on his speed and quickness.”

Register explains why he compares Bush to this all-time great.

“His game is similar to Klay Thompson,” Register said. “He doesn’t have to create off the dribble to get a shot.”

Bush patterns his mentality after this future Hall of Fame member.

“I like LeBron and the reason is the way he leads,” Bush said.

Bush lists math as his favorite subject in school and one day hopes to attend the University of Kentucky.

Register explains an area of Bush’s game that if improved upon can elevate his impact on the floor. Register believes the sky is the limit as long as Bush continues to stay hungry.