2021 RB Kohl Robertson is being compared to Christian McCaffrey

2021 RB Kohl Robertson is being compared to Christian McCaffrey 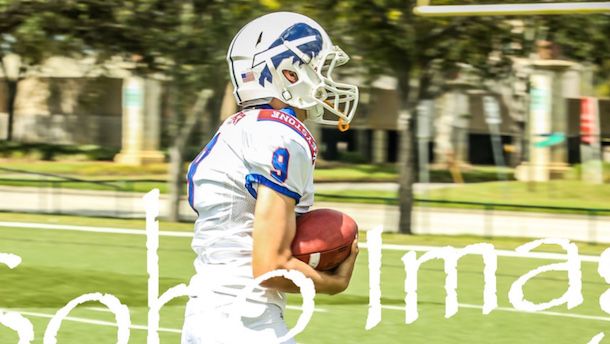 Kohl Robertson is one of the best players from the the Tampa, FL area in the Class of 2021.

The 5-foot-10, 150-pound Robertson, who attends Land O’Lakes high school, is a tremendously talented athlete that plays running back, safety, punter and kicker for the Keystone Bills.

Robertson has also played for the South Pasco Predators and Carrollwood Hurricanes.

Robertson has received multiple offensive and defensive team MVP awards for his exceptional play on the gridiron.

Robertson takes pride in being recognized for his efforts. The awards inspires him to continue to hone his craft.

Robertson understands the work is just getting started if he wants to have a lengthy career playing football.

“It feels great, especially being voted by all your teammates and coaches,” Robertson said. “It motivates me because if I continue to get better and better I can have high schools and colleges looking at me. I know I’ll have to train harder each and every week and get bigger as I face harder competition.”

Robertson’s passion for football has two facets to it: competition and camaraderie.

“Winning and bonding with new people,” Robertson said. “I enjoy having a good time. My teammates help  me be the best that I can be.”

Robertson has learned many life lessons from football that he applies in off the field situations.

Juan Long is in his first year coaching Robertson with the Keystone Bills.

Long explains the best parts of Robertson’s game on both sides of the ball.

The coach issued some pretty lofty praise for the athlete.

“His instincts is the best part of his game. He's able to see things before it even happens on both sides of the ball,” Long said. “His vision at running back allows him to see holes the most kids his age would not see. Defensively he has great instincts and anticipation for the ball. He's able to make plays and reads better than any kid I have ever seen.”

Long explains how Robertson’s dedication rubs off in a positive way for his teammates. Robertson is proof that you don’t have to be the loudest in the locker room to be one of the most well-respected.

“Kohl leads by example,” Long said. “He doesn't speak out verbally. However he works hard with everything through his actions. He is first for every sprint. When the kids see someone with his talent working so hard it only motivates them to do better.”

Robertson gives a glimpse into his approach when he does decide to speak up though. The athlete is very efficient with his message and is careful to use his words wisely.

“I try to be a good teammate by having faith in them and always motivating them to get better,” Robertson said. “I always tell them to shake it off because you can’t let anything get to your head.”

Robertson breaks down the most essential aspects of his positions.

“Well most importantly keep your head up and don’t tackle with your head down,” Robertson said. “On offense you have to be able to find the hole and make clean cuts, also being able to protect the quarterback at all times. On defense make sure you know what zone you’re running and who you have on each play.”

Robertson is a very respectful young man that takes joy in gleaning the opinions of his elders.

“In my personal opinion you should ask your coaches what you have to do to get better, whether that’s running after practice even after sprints or training extra with them. But the most important things they teach you are discipline and respect. Always treat your coach like he’s special because he’ll help you throughout your career,” Robertson said. “They definitely give me great advice such as treat this practice like it’s your last. Also, once you step on the field there’s no friends, as well as zone out fans and the other team. Don’t let them get in your head.”

A perfect example of Robertson’s importance to the Bills came in a riveting 20-19 victory vs. the previously undefeated Brandon Ravens.

“They drove down the field and scored against us. Even though we didn't prevent the touchdown he

was making most of the tackles. He then took the ensuing kickoff 70 yards for a touchdown to tie the game up,” Long said. “They came back and scored against us on the next drive. He took that kickoff for another touchdown. On their next drive he had an interception to stop them. Later in the day he had the game-winning field goal.”

The combination of versatility, intelligence and dedication are taking Robertson far this season.

“He’s a student of the game. Every week he ask me what did he do wrong and what does he need to improve upon?” Long said. “His football IQ along with a great work ethic has made him one of the better players in the league this year.”

Robertson looks up to this former Stanford star because of the similarities in the way they grind.

“Christian McCaffrey because he trains harder than anyone else,” Robertson said. “Every day on Instagram I saw him getting stronger and trying to get faster and faster as the days went by.”

Long believes McCaffrey is a good player for Robertson to strive to be like because of his versatility.

Defensively, Long sees shades of Ed Reed in the athlete’s game due to his field general attributes.

Robertson lists math as his favorite subject in school.

Long outlines the next area of improvement for Robertson defensively.

“He wants to make every play so I am working on his patience, especially on defense.   He likes to come and fill holes quickly,” Long said. “I warn him that if he is overly aggressive teams will use play action pass against him.”

Robertson is driven to be the next great Florida Gator.

“Seeing all these players getting drafted from there to the NFL is ridiculous and also because it’s my home state,” Robertson said. “It gives me more confidence to have my favorite team only two hours away and if I work harder I could possibly someday make it there.”

Long has no doubt that Robertson is headed in the right direction on the road to his accomplish his dreams.

“He has the potential to play Division 1 football somewhere,” Long said. “Not only does he have the athleticism but he has the intangibles such as dedication and work ethic.”