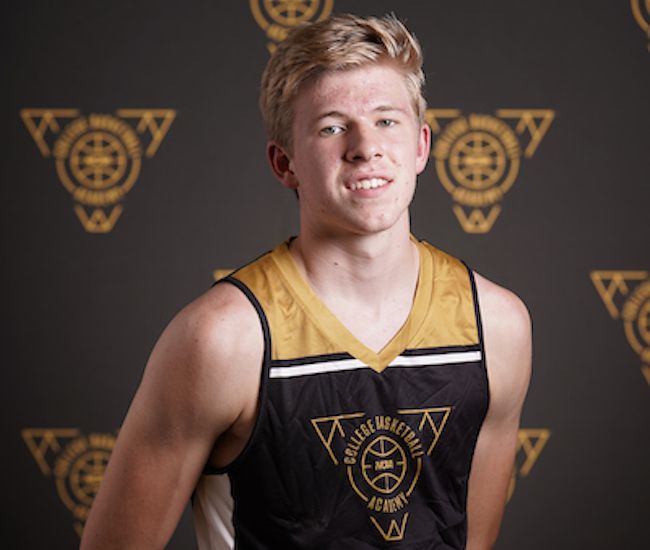 Jake Charske is one of the best players from the Ocala, FL area in the Class of 2020.

The 6-foot-3, 175-pound Charske is a dynamic player that works as a shooting guard for the Tampa Bayhawks.

Charske has earned plenty of recognition during his career, such as capturing Offensive MVP last season. Charske also broke his school’s single-season three-point record and is on pace to break the all-time record.

Charske is humbled by the opportunity to compete against the best of the best and showcase his skills.

“These awards pretty much show all the hard work that I have put in the off-season with my coaches and teammates,” Charske said. “I’ve participated in most of the live period events during AAU season and I got a chance to play against some top level players and it’s always good to see how I match up with them.”

No matter the opponent, every game Charske is determined to give it his all.

Charske is going all out.

The motor is always at full throttle whenever Charske steps between the lines.

“At my position I always try to stay aggressive and make the right play for my teammates,” Charske said.

Charske has great passion and energy whenever he’s on the hardwood. Charske tells why he enjoys the game of basketball so much.

“I love playing in front of big crowds when it’s super loud in our gym because it just gives a different energy,” Charske said.

Charske has learned many valuable lessons from playing basketball that he applies to his everyday life.

“Playing basketball has taught me that relationships matter in life and you have to learn how to get through hard things,” Charske said.

“My favorite memory of playing is probably all of the team camps I’ve went to with my high school over the summer,” Charske said.

Byron Batchelor has coached Charske for one year with the Tampa BayHawks.

“Jake plays primarily SG and secondarily PG. At SG, Jake is a really good scorer from all three levels. At PG, Jake has good size and Is a very good passer in transition,” Batchelor said. “In my small opinion, from what I’ve seen he was the best shooter in the state and on this past travel circuit. He can shoot it from NBA range with consistency, plus is great at catch and shoot and off the dribble.”

Charske takes his role as one of the leaders on the team very seriously. Charske makes sure he’s a daily positive influence on his peers.

“I demonstrate being a good teammate by always showing up to practice on time and working hard every day,” Charske said. “I always tell my teammates to have fun but to stay focus and work on the things that will get us better.”

Batchelor adds that Charske is one of those consummate teammates that every squad needs to be successful.

Charske is appreciative of having amazing male role models that are supportive.

“Our coaches always tell us to respect others and treat them the way you want to be treated because it reflects on our program,” Charske said.

Batchelor is an advocate of Charske’s capabilities.

In addition to his playmaking skills, Charske also has a high level of basketball IQ as well.

Charske has excellent basketball awareness that puts him in position to thrive.

“Jake is great anticipating on defense, he gets a lot of deflections and steals,” Batchelor said. “Offensively. Jake knows how to move without the ball.”

Charske is on the grind to perfect and hone his craft in any way possible.

“Jake practices shooting in the gym with the lights out,” Batchelor said. “He’s also more athletic than what he gets credit for and tested really well at the NCAA combine.”

Batchelor explains why he compares Charske to this Hall of Fame legend.

“Jake reminds me of Mitch Richmond,” Batchelor said. “He can really stroke it and he’s strong where he can score in the post and quick enough to blow by you.”

Charske patterns his mentality after this elite perimeter standout.

“I look up to Klay Thompson because I love how he plays both sides of the ball,” Charske said.

Charske is constantly striving for greatness in everything that he does.

“My dream college is probably Ohio State because that is where I grew up,” Charske said.

Charske lists economics as his favorite subject in school.

“My subject in school is economics because it teaches you how to manage your money,” Charske said.

Batchelor outlines the areas of improvement that will take Charske to the next level.

Batchelor believes the sky is the limit as long as Charske continues to stay hungry.

“Kyle Guy is in the NBA and I think Jake is bigger and more athletic,” Batchelor said. “If Jake proves he’s a great shooter in college, we’ll see what happens.”