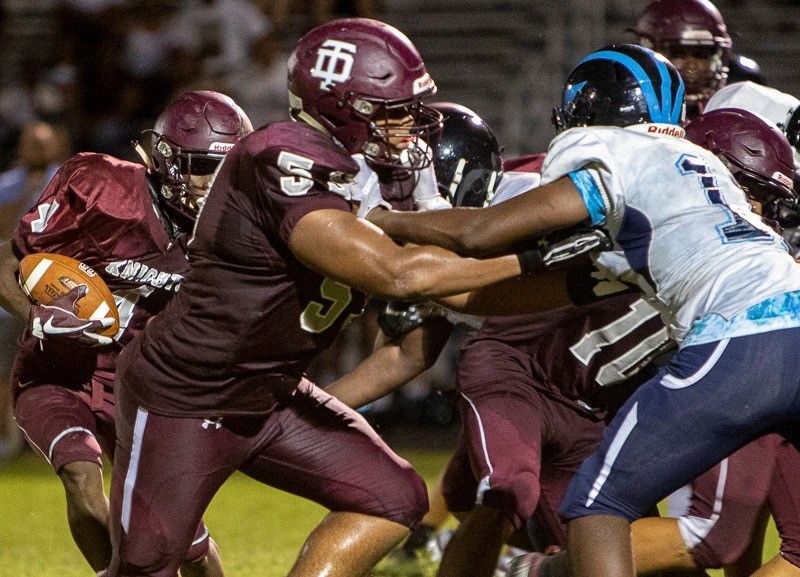 Chesterfield, Va.’s Jayden Baskerville is no stranger to receiving accolades for his impressive play on the offensive and defensive lines. The 2023 Freshman 450 pick, who stands at 6’1”, 258 lbs., was the starting at right tackle for the varsity Knights at Thomas Dale High School in Chester, Va. He’s worked hard to not only maintain a 4.0 GPA, but also get a shot on the varsity team.

“One of my goals was to compete for a starting position,” he said, helping the Knights to a 5-3 record. “Playing against [the varsity team] made me want to get better. My teammates helped me along.

“Blocking for one of the premier running backs in high school is a complete honor,” he added. “[2020 Notre Dame commit] Chris Tyree is that good.”

Baskerville has been playing football since he was 5 years old, and by 2015 he was named Defensive Player of the Year, and a year later 2016 Diamond Sports Group 6th Grade Player of the Year. By 2017, he realized that he could play above his age range with the nationally ranked UYFL/AYFL Central Virginia Hurricanes. He started at guard—the only 7th grader to do so.

“We made it to the national championship game in Florida,” he recalled. “That was a great experience for me. Playing for the ’Canes helped me realize I can play against the best.”

If he sounds like he is bragging, he’s not—far from it.

“I let my play do the talking,” he noted. “I work hard in the offseason and work on my craft for the following year. I came into last year as an 8th grader and started on the Thomas Dale JV team. We went 10-0. I wanted to compete against kids older than me. Same goes for this year. I could have played JV, but I wanted more.”

With his sights set on playing for the varsity Knights, Baskerville knew that it would take a lot of work to prepare, but he rose to the challenge.

“I got used to the grind, and it became a routine thing for me,” he said. “Five days a week; three hours or more. [Another] challenge was wondering how the varsity players would react to me coming into the season. I was doubting myself until that first day of contact. After that day, I realized that I could compete.”

In addition to his teammates’ help, his father, Erwin Baskerville, has been giving his son invaluable football insights. Erwin played linebacker at Virginia State University.

“He’s been giving me plenty of tips, and he’s my biggest inspiration,” Hayden said.

The highlight videos in his Youth1 profile show that he is a dominant blocker, paving the way for the Knights’ running game and not letting up until the whistle blows. In addition, he can be a force at defensive tackle, playing with tenacity and relentless drive. With a year’s experience or two, he should be even bigger trouble to opposing teams on both sides of the ball.