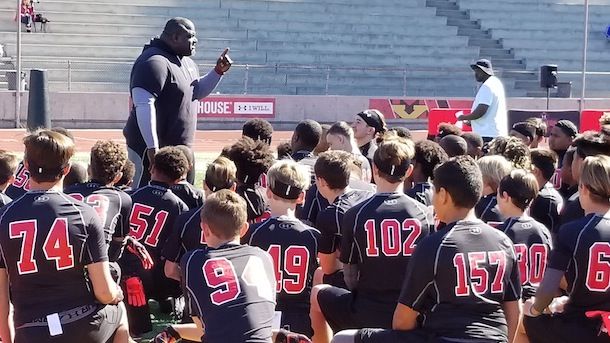 The 2018 NFL Hall of Fame class will feature stars like Ray Lewis, Brian Dawkins, Randy Moss and many more. It takes a lot of hard work and commitment to reach football's greatest stage and it begins at the youth level.

Many of the young stars that arrived for the 2018 Under Armour All-America Football camp on Saturday at Mission Viejo High School are on the right path, the same path as the best of them to play the game.

The camp, which consist of over 150 young men from grades sixth through eighth, began the event with a small taste of the NFL experience starting with the 40 yard run dash and the vertical leap that we see at the NFL Draft Combine. The camp gives the athletes a chance to be on the radar of coaches and scouts, something many of them can expect for the rest of their athletic careers.

In order for the young men to be their best they have to be coached by the best and by coaches who have been in their shoes and lived their dreams. The camp was coached by eight former NFL stars starting with former Dallas Cowboys offensive lineman, George Hegamin, who was also a Freshman All-American at North Carolina State. Hegamin taught the future stars certain blocking techniques with the bags and tackling dummies. Hegamin techniques were easy to follow with several young lineman leading the group that included Tyson Molioo, Michael Roberts and Dominic Williams. The O-line MVP award went to eighth grader Dylan Lopez.

The next station was for defensive lineman and was led by former Cleveland Browns lineman Larry Burt, who taught the athletes how to do a quick swim move with the bags. Burt, who played for Miami of Ohio, took his time as he explained everything in great detail. Elijah Mercado was a standout and seventh grader Luke Bledsoe and eighth grader Jairus Satele took home MVP awards. Bledsoe was also selected to the UA Next game in Orlando, Florida with a golden invitation, similar to the Golden Ticket from the movie ‘Willy Wonka and the Chocolate Factory’.

The DB segment was led by former Virginia Tech, Detroit Lions, and New Orleans Saints defensive back Corey Fuller. Fuller had several talent players like Jonah Lewis Jr. and David Bailey, who shined when he and the defensive backs lined up with the wide receivers being thrown the ball to some of the best young arms in a very entertaining part of the event. The MVP Award in the DB position went to a sixth grader. Kuron Jabari Jr. took the award.

The fourth station was the running backs station, led by Lamont Warren. Warren played at Colorado before playing eight seasons in the NFL for the Indianapolis Colts, New England Patriots and Detroit Lions. Warren went through the basics with the backs by jumping over bags and catching the football in the process. Warren had several running backs that shined on the football field like Phillip Hernandez, Jaylen Blacksher and Lucas Pesak. 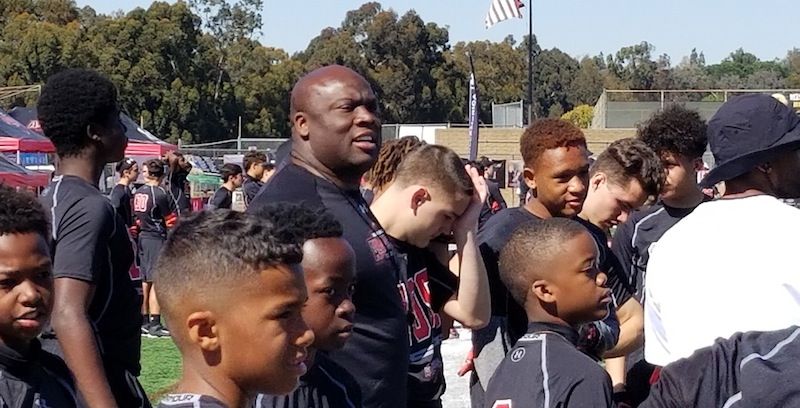 The quarterbacks were led by Pro Bowler Jeff Blake. Blake played 14 seasons in the NFL, mainly with the Cincinnati Bengals, threw for over 20,000 yards. The member of the East Carolina Hall of Fame gave the quarterback a big edge with his knowledge. Blake worked on one of the important things for a quarterback to work on, footwork. Beau Green shined the brightest out of all the quarterbacks and will be a household name soon. Along with Green, Israel Carter, Eric Butler, Jackson Holt, Safdar McCrary and Jayden Denegal also shined, especially with their throwing skills to their wide receivers, who were tightly covered by the best defensive backs. The QB MVP Award went to sixth grader Hype Grand.

The wide receiver station, coaches by Jermaine Lewis had the most athletes at the camp. Lewis is a two time Pro Bowler who scored a touchdown on a kick return at Super Bowl XXXV. Lewis played nine years in the NFL and holds five Baltimore Ravens franchise records. Lewis taught the receivers on routes, footwork, hands and many other skills. The wide receivers faced tough coverage with the defensive backs, but put on a show with fantastic catches. Lewis had some great athletes like Matthew Moore, Khalil Peart, Aaron Williams, AJ Jones, Keyan Burnett and many more, but the MVP Award went to two wide receivers; eighth grader Tetairoa McMillan and seventh grader Jarell Joiner, who like Bledsoe, got the golden invitation to the UA Next game.

In the seventh  and final station was led by former linebacker and 2006 first rounder Ernie Sims. Sims played for four NFL teams and was an All-American at Florida State. Sims taught the linebackers everything he has learned in his eight year NFL career. Sims had linebackers like Dominic Spivey, Kurt Chesney and many more that shined at the All-America Camp.

Many of the young athletes are on the right path, the same path their coaches, the top NFL stars and the new NFL Hall of Famers went through. The All-America Camp will go cross country and head to Miami, Florida to North Broward Prep on March 17.