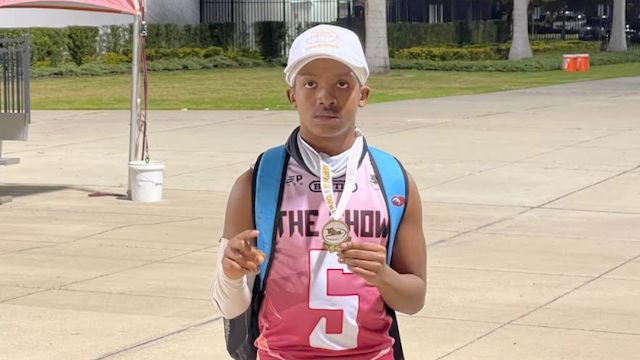 The 2026 class is brimming with tantalizing talents that are rising amongst the ranks while making a name for themselves. Among the premier rising youth talents on the scene is 2026 RB/DB Jamil Stephens.

Stephens has begun to turn heads for his playmaking ability on both sides of the ball. The Indianapolis, Indiana native has already earned invitations and participated in the UA All American Camp, Rivals Combine, and The Show by NextGen.

Stephens, who most recently played for the Indy Elite Panthers and KC Outlaws, is earning his stripes while working to be the best athlete he can be.

"My favorite part of playing football is playing on offense. It allows me the opportunity to showcase my jukes," Stephens told Youth1.com.

Standing at 5'4 120 lbs., Stephens shines when he has the ball in the open field. He loves to dance on defenders while making his way to the endzone. He has soft hands and the ability to make plays catching the ball as well.

"I play RB/WR and OLB/DB. I enjoy playing RB because I get a chance to run someone over, or juke them. As a WR I get to break a defender off at the line and make a spectacular catch at the end," Stephens said.

"Playing on defense at OLB I get to come up and hit the QB or opposing RB, and at DB I get to lock down a WR," he added.

Stephens was selected to participate in NextGen's The Show coming up at the end of June. This will serve as another opportunity for Jamil to showcase his abilities on a national level.

"Being a team leader, my vision, and my hustle," he added when asked about his strengths.

As he looks to take his game to the next level, Stephens has identified a few areas of his game he's working to improve.

"I’m going to work on my strength, and speed for the next level of my game," Stephens said.

2026 RB/DB Jamil Stephens is a rising talent with loads of potential. He's building a reputation as an athlete to watch from the 2026 class. With performances at the UA All American Camp, Rivals Combine, and NextGen's The Show under his belt, Stephens is earning his stripes.

For more on Stephens, check out his Youth1 Player Profile below. 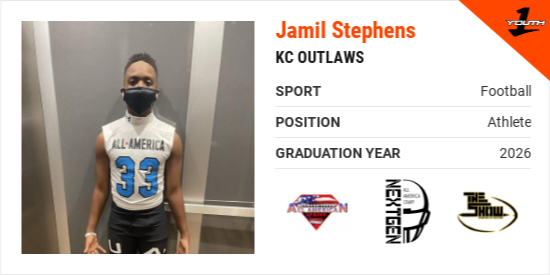