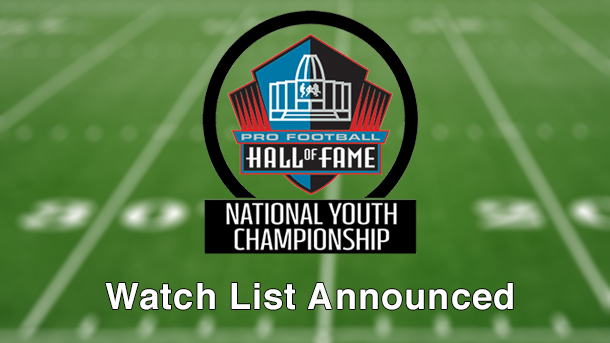 CANTON, OHIO – The National Youth Football Championship, presented by the Pro Football Hall of Fame, in Canton, Ohio today announced the top youth teams from its “National Watch List” for the nation’s largest postseason youth football event. The “watch list” will be updated weekly as the season progresses.

The event will be capped by the tournament championships being played, for the first time, at Johnson Controls Hall of Fame Village, a nearly $800 million mixed-used development underway around the Hall of Fame’s campus in Canton. Preliminary championship rounds will be played at the world-class National Youth Football & Sports Complex and the championship games at Tom Benson Hall of Fame Stadium.

More than 50 regional scouts from across the country headed by former NFL General Manager Ray Farmer and renowned national collegiate Scout Gary Howard have been watching and evaluating top 7U through 8U level teams. Many of the nation’s top teams have already committed to playing in the event including teams from the notable Snoop League and The Money Team.

A unique and exclusive element to the Hall of Fame’s championship is the alignment with the Pro Football Hall of Fame’s “The Game for Life” program that focuses on the values learned from the game. A character development seminar built around values such as commitment, integrity, courage, respect, and excellence learned from the game and applied to all facets of life will be provided to the participating athletes and coaches. The program is led by Hall of Famers and Hall of Fame staff.

The Championship series features two conferences, all-star (6th-8th grade) and team based (7U-8U levels). Competition will take place in November and December with all eyes on reaching Canton on Dec. 14-17. The national championship games will be played in new Tom Benson Hall of Fame Stadium, home to the annual Hall of Fame Game and Enshrinement. All championship games will be televised and live streamed to the nation.

“We are thrilled to partner with the National Youth Football Championship and excited to see the selection process begin for top teams and the next generation of promising athletes,” Pro Football Hall of Fame President & CEO David Baker commented. “This youth championship series will provide a platform for great competition while also imparting the values learned from this great game that will help shape their futures, on and off the football field.”

“This national showcase event will bring the top youth teams and youth athletes together like no other and it will serve as a cornerstone property for football in America. With nine regional events, a blue-ribbon selection team and a final stop in Canton, this is the ultimate in youth football,” Rich McGuinness, General Manager of the National Youth Football Championship stated.

The selection process started in the summer as national scouts attended jamborees and preseason football events. It has continued through September as teams began their season and will continue into October as top teams separate themselves from the pack.  Hundreds of youth coaches will be nominating their top teams online through www.youthfootballchampionship.com. In each region, only eight teams per division will be selected per age level.

team nomination information can be found at www.youthfootballchampionship.com