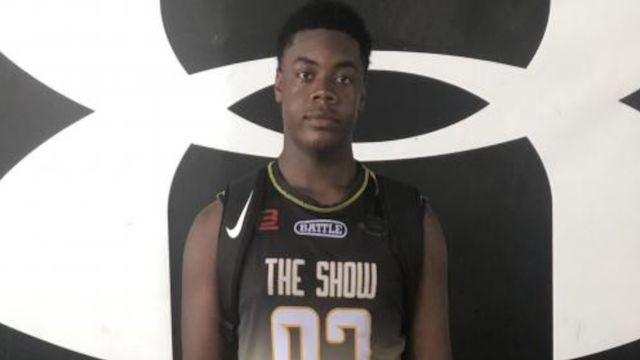 The state of St. Louis, MO area is a growing talent pool for young athletes, especially for the sport of football. Among the premier talents from the 2023 class representing the city of St. Louis is 2023 DE Tyler Gant, who is building a reputation for his talent on the football field.

"I love the beginning of Friday nights before games. We are out on the field warming up and hyping each other up," Gant said of his favorite part of playing football.

"The hard work at practice all week is finally about to be justified. That’s my favorite part of playing football," he added.

Standing at 6'3" 250 lbs., Gant is a physical presence on the defensive line. Each down he plays with a relentlessness that allows him to have an impact every play. He uses his quick hands to engage his opposing lineman, create space, shed the blocker and then make a play on the ball. Once he gets his hands on the ball-carrier, Gant uses his strength to bring the ball-carrier to the ground.

"I play Defensive End and Defensive Tackle. What I like most about my position is we are on attack; we can be as aggressive as we want to be. There aren’t many instances where being strong and aggressive is needed but D-Line is one of them," Gant said.

"Some strengths that I have on the football field are my large arsenal of moves I can use to get past offensive lineman. I have long arms so I can displace OL and blocks to stop runs," Gant said of his strengths.

"I also have good footwork and knowledge about multiple positions so you can line me up at multiple places in the box," he added.

Gant currently plays on Varsity for Christian Brothers College High School. He feels like he's progressing nicely on and off the field.

"I feel like I am progressing very well. Every month I pick out a weakness of mine and practice getting better at it repeatedly," Gant said.

"My two latest achievements are winning freshman athlete of the semester at my school, and also a personal goal of mine in attaining straight A’s in the honors program at CBC with a 4.429 GPA. I have also got college camp invites from regional showcases," he added.

With his dedication to his craft, Gant has plans to work hard to improve his game.

"I am working hard on increasing my explosiveness and pursuit so when I get off blocks I am able to adjust and track down the ball carrier," Gant said.

"Some things I am going to work on is getting better at open field tackling. Making sure that I am doing it efficiently and effectively. Another thing is pursuing down the line of scrimmage. Meaning to go from one end of the field to the other and make a play," he added.

2023 DE Tyler Gant is known for his game-changing ability in the trenches. Each and every down he brings the aggressive and relentlessness that helps his team win.

Gant has big plans this offseason to continue his ascension.

"I am participating in some upcoming football camps at Kansas State, Vanderbilt, Brown U & Mizzou if the quarantine is lifted. I have already been to the Hall of Fame National Combine in Orlando, Florida and I also went to the Elite Combine locally in St. Louis," Gant said.

"This summer I also plan on going to the NextGen camp and the Rival’s Camp in Nashville, Tennessee," he added.

For more on Tyler Gant, check out his Youth1 Media Profile -> here.