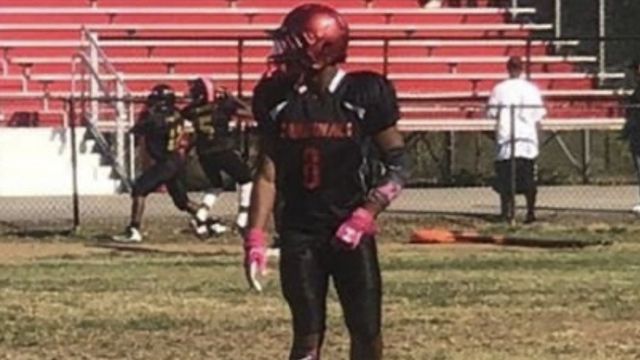 Among the rising stars from the 2024 class is WR/SS Santana Crayton, who's making waves for his playmaking ability on the football field.

The Louisville, KY native is proving to be one of his areas most promising youth talents. Standing at 5'8" 162 lbs., Crayton's speed sets him apart from his competition. He's the type of athlete that can be lined up anywhere on the field and his impact will be felt.

Feeling free and BEING DOMINANT," Crayton said of his favorite part of playing football.

On offense, Crayton is a load with the ball in his hands. Once he gets a full head of steam he's a bear to bring to the ground. His lethal combination of size and speed is remarkable. Throw the ball in his direction and he'll make a play. Crayton likes jumping to snag the ball out the air at its highest point.

Simply put he knows how to make the big play.

"I like being the go to WR," Crayton said.

On defense, Crayton shines as a hard-hitting Strong Safety. He hunts down ball-carriers with his superb instincts. Once he sets his sights on the runner, Crayton isn't afraid to lay down a big hit.

"Shutting down the other team WRs and making a lot of tackles," Crayton said.

Crayton is constantly working to take his game to new heights. He's working hard to become the best football player he can be.

"I am working on running better routes at all times. Working on being able to disguise my blitzes from SS," he added.

Crayton has enjoyed his fair share of success on the field. Here are some of his most recent accomplishments in his own words.

"I also received team MVP for my team, Tenth Street Cardinals. Was named player of the week for the 13U SR division in my team's league, Louisville Youth Football League," he added.

2024 WR/SS Santana Crayton is a Kentucky talent on the rise. His ability to shine at a variety of positions makes him a dynamic athlete worth keeping an eye on.

For more on Santana Crayton, check out his Youth1 Player Profile -> here.

Check out Crayton's highlights below.