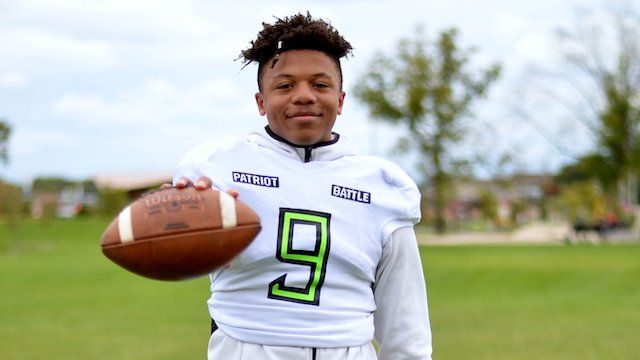 The 2024 class is filled with talented athletes, especially at the skill positions. Running Back is one of the most well represented positions on Youth1's recently released Elite101 Rankings.

Among the stellar RB prospects from the 2024 class is Jaden Hart, who came in at #9 on our Elite101 Rankings.

"When I found out my ranking I was very surprised and felt very blessed," Hart told Youth1.com.

"It means a lot to me and makes me feel good and let me know that there is a purpose for this grind," Hart added.

Youth1 has been covering Hart for years now, so it's no surprise to us that he's earned a top 10 spot on our Elite101 Rankings. Hart, who was recently spotlighted on Youth1's podcast "The Spotlight", has earned every accolade that's come his way. He has loads of natural talent with the work-ethic and dedication to match.

"Yes," Hart said when asked if he was surprised to find out about being ranked.

"Because it showed me that my name is truly out there as one of the best RBs in the nation," he added.

Hart is easily a top 10 prospect in his class, and honestly was strongly considered for a top 5 spot. Standing at 5'11", 170 lbs., Hart is a lethal combination of size and speed at the RB spot. His ability to run around and through defenders is what first grabbed my attention when I saw Hart play as a 5th grader.

His game has only become more dynamic since then. Hart loves playing through contact and has an unwavering motor that never quits.

"I feel like I am getting better everyday watching film practicing my cuts and getting my endurance up," Hart said of his progress.

"I love being able to scan the field and hit the holes with my great vision," Hart added.

The Michigan City, Indiana native is a playmaker with the ball in his hands. He runs with power that allows him to hit the hole with purpose. He has a great feel for the game and vision as a runner. Give him the ball and he'll make a big play for your offense.

Hart plans on attending a bunch of college camps during the spring, and was recently selected to play in the Pro Football Hall of Fame game in January of 2020.

His success on the field, along with being named to Youth1's Elite101 Rankings will only serve as motivation for him going forward.

"Yes it serves as motivation because there is always someone coming for your spot, so you have to be hungry at all times," Hart said.

RB Jaden Hart is among the elite prospects from the 2024 class. Being ranked #9 overall is a testament to his talent level. He remains steadfast in his desire to improve and become the best athlete he can be.

"I am in the lab 24/7 and always working on my craft with my trainer Eric Griffin at the elite performance academy," Hart said.

For more on Jaden Hart, check out his Youth1 Media Profile -> here.