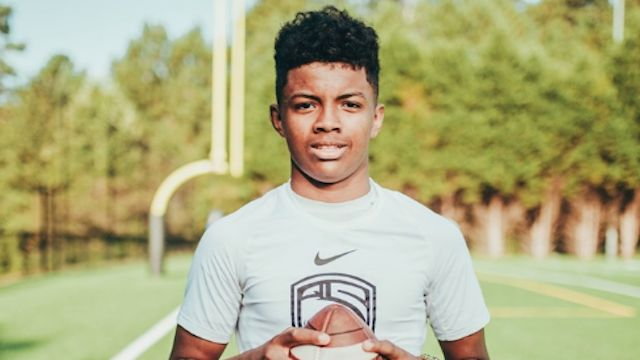 The 2024 class is filled with talented athletes, especially at the Quarterback position. QB is one of the most well represented positions on Youth1's recently released Elite101 rankings. From dual-threat quarterbacks to traditional pocket passers, the 2024 class has some very stellar QB talent.

Among the premier talents from the 2024 class is Kamari McClellan, who came in at #3 on our Elite101 Rankings.

"I felt very excited and honored because only the elite makes this list," McClellan told Youth1.com.

"Right before practice my Dad called my phone and told me the rankings were out, and that I was ranked #3 overall position out of the country," he added.

McClellan has been on Youth1's radar for sometime, as he was named to our first annual Next Up Watchlist last year as a 7th grader. He has a relentless work ethic and has earned every accolade that's come his way. Earning a spot atop the Elite101 Rankings is no surprise to anyone that's familiar with McClellan's ability on the football field.

"It means everything to me. It shows me the hard and consistent work my father/trainer and I have been putting in when no one is watching paid off. So it’s definitely an honor to be ranked #3 overall position because it’s not easy knowing other athletes are working just as hard as myself," McClellan said.

Standing at 6'0" 155 lbs., McClellan is a true talent at the QB position. He's a dual-threat QB that knows how to dice up the defense in a variety of ways. He can make all the throws. He has a strong arm with the ability to drive the ball into tight spots and throws beautiful dimes on deep balls.

McClellan's mobility is one of his elite attributes. He can make something out of nothing when the play breaks down, or deliver strikes while on the move. His mobility also shines on options plays and designed runs, where he can evade defenders in the open field with his elusiveness.

"My strengths are everywhere," McClellan said.

"I can throw on and off platform and recognize coverage at the line. Footwork, timing and great ball placement is something I’m great at," he added.

The Mobile, AL native has a commanding presence in the pocket with a personality that never gets too high or too low. He serves as a real leader on the field for his team.

"Everything about it. The grind, the competitiveness, and the legacies you get to leave on the field," McClellan said of his favorite part of playing football.

McClellan has participated in NextGen's invite-only main event The Show for two consecutive years, and was recently invited to participate in the UA Next Game hosted by Under Armour. Being named as an Under Armour All-American is a testament to the type of elite young athlete McClellan has developed into.

"I’m maturing and growing fast," McClellan said of his progression.

"Also, I’m able to go through progressions and get the ball out faster. I’m always able to run when needed but rather look down field at my targets to make a completion on an off-platform throw."

QB Kamari McClellan is one of the elite prospects from the 2024 class. Being named as a top 3 athlete in the 2024 class speaks to the type of reputation he's built.

He knows that this is just the beginning of his football journey.

"My journey doesn’t stop here there’s more work to be done," he said.

For more on Kamari McClellan, check out his Youth1 Media Profile -> here.