Bear McWhorter is one of the best players from the Cartersville, GA area in the Class of 2026.

The 6-foot, 220-pound McWhorter, who attends Cartersville Middle School, is an imposing  player that works as an offensive lineman and defensive lineman. 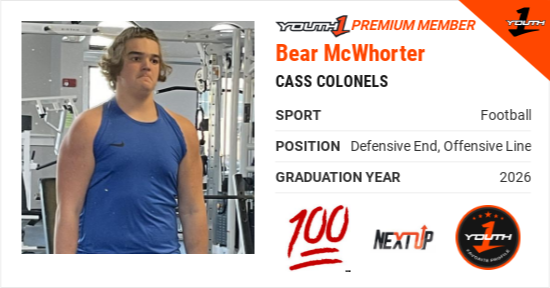 McWhorter is humbled by the accolades.

“The awards and publicity are great, especially for my aspirations of playing football in college. However, the goal is always team success first. I figure if the team does well, I’ll benefit too,” McWhorter said. “It was a good experience...probably more of a good measuring stick. Last January, in the All American Bowl, I got to play with the best players from Georgia. We got to play some of the best across the country. It made me realize I might have the opportunity but I also have great competition.”

McWhorter is a regular at Nick Saban’s camp.

“I go to Nick Saban’s camp at the University of Alabama each year. It’s more about work than it is fun, but I grow each year from it,” McWhorter said. “I was going to go to others last summer but they were all canceled due to COVID.”

No matter the opponent, every game McWhorter is determined to give it his all.

McWhorter is going all out.

The motor is always at full throttle whenever McWhorter steps between the lines.

“My mindset is to beat the man in front of me,” McWhorter said.

McWhorter has great passion and energy whenever he’s on the field. McWhorter tells why he enjoys the game of football so much.

McWhorter has learned many valuable lessons from playing football that he applies to his everyday life.

“Football has taught me to get back up and keep fighting,” McWhorter said.

“My 9 year old year I played on the 10U state championship team,” McWhorter said. “We beat the Savannah Stars 31-6. I just can’t believe how good it felt to win.”

McWhorter takes his role as one of the leaders on the team very seriously. McWhorter makes sure he’s a daily positive influence on his peers.

“As a lineman, my whole job is to make my teammates look and do better. Other than that, I hope I’m seen as a leader,” McWhorter said. “The best advice I give is to keep pushing. It’s never over.”

McWhorter is appreciative of having amazing male role models that are supportive.

“I’ve learned from my coaches that football teaches you more about life than anything. Things don’t always go your way, but you have to get back up and keep fighting,” McWhorter said.

McWhorter patterns his mentality after this standout.

“I look up to Bradley Bozeman,” McWhorter said. “He was dominant at Alabama and started right away in the NFL.”

McWhorter lists science as his favorite subject in school.

“My top interests are Alabama, Tennessee and Clemson,” McWhorter said.

“I do a lot of work on my footwork and agility,” McWhorter said.

McWhorter is striving for greatness in all that he does.

“For high school I want to play varsity as a freshman,” McWhorter said.

McWhorter describes what he believes separates himself from the pack.

“At this point, I’m generally bigger and stronger than most kids my age,” McWhorter said. “But I have to continue to work on my agility and just started strength training to get to where I want to be.”