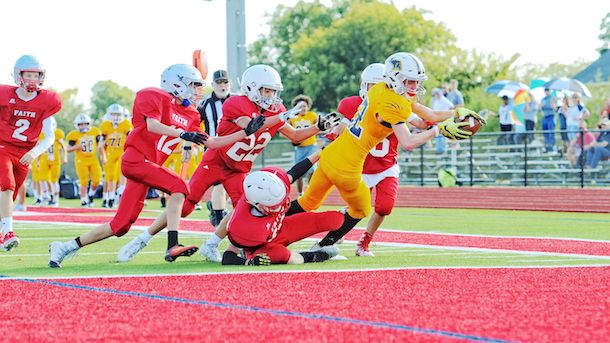 Jayroe was recently awarded the #7 spot on Youth1's Elite101 rankings, which featured the 2023 class this year. Being named as a top 10 athlete in the country from his class is a stellar achievement for AJ, who has built a reputation as a lethal receiving threat.

The Plano, TX native was thrilled to find out he was ranked #7.

"My initial reaction when I found out I was #7 in the country was excitement and I wanted to share it with my family. I didn't know what to expect where I would be put in the rankings or in at all. As the day and week went on I didn't let it stop me from working and grinding hard still because now I want to continue to climb this chart," Jayroe said.

"Being ranked is really cool especially very high knowing that you are getting noticed for all the hard work and I'm thankful for that! At the same time its just a number and what matters most is all the work you put in and how much heart you have," he added.

Standing at 6'3" 163 lbs., Jayroe has ideal attributes for a high level receiver. He is tall, fast, and has great hands. His height gives him an obvious advantage against his opponents, but he's more than just height. He runs great routes and has the ability to out run defensive backs downfield.

His ability to leap and snag the ball out the air at it's highest point gives him another level many other youth wideouts just don't have.

Jayroe isn't limited to one side of the ball either. He makes an impact on defense too.

"My favorite part of playing football is just everything about the game from TDs to turnovers to big hits to crazy routes and everything that comes with it. I just love the atmosphere that surrounds the game," Jayroe said.

"I play Wide Receiver, Safety, and Cornerback. I enjoy just being able to go up and get the ball no matter where it is and use my speed to run around all over the field. I enjoy scoring touchdowns and making interceptions and really use everything I have to help my team win," he added.

Jayroe has been recognized for his ability on the football field. Some of his recent successes include attending NextGen's The Show, where he received 3 Game MVPs and The Freak Award MVP. Additionally, he won the Texas Elite 7 on 7 State Championship this summer in Waco, Texas at Baylor University.

His stats from last season include 19 touchdowns and 915 receiving yards. He also had multiple INTs, while helping guide his team to an undefeated season.

With the level of talent Jayroe has, it's no surprise that he has such an strong impact on the field. His combination of speed and size is rare and that's why he's considered an elite athlete from the 2023 class.

"Strengths I have on the football field are my gift of speed and jump ball ability as well as making the big time play to change the whole game. I feel like there is an animal in me when I play that makes me go harder than most people," Jayroe said.

"I believe I mentally know the game better than many and I know my surroundings where I can make many people miss at one time or the whole field," he added.

As he pushes himself to get better for the next level, Jayroe plans on using his #7 ranking as motivation to catch the 6 guys in front of him.

"This serves as motivation for me, because knowing I'm up high on that list people are gonna want to come for that and take my spot so there motivation becomes my motivation to not let them take it or not let me play my game. I'm trying to be the best me so I have to continue to work and strive for greatness every day. " Jayroe said.

"I feel like I can get higher on that list and get better than I am all the time so I'm coming for the 6 spots in front of me," he added.

2023 WR AJ Jayroe is a talented receiver on the rise. He's ready for everything coming his way. He's working hard to make sure his impact is felt immediately at the high school level next season.

"For the next level I am working on getting physically stronger. I am continuing to work out the right way for what's best for me so I can play Varsity next year as a Freshman," he said.

For more on AJ Jayroe, check out his highlights below.