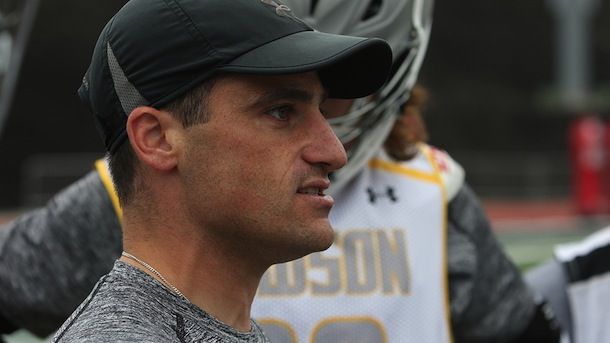 These days, a Towson lacrosse gameday is much different than it was during Shawn Nadelen’s first year as head coach. While Nadelen, associate head coach Anthony Gilardi and assistant Dan Cocchi take the field, there’s nearly a full team of little ones wearing Black and Gold, cheering on their dads.

The three young coaches have seven kids between them — all 5 or younger — and on gameday they’ll all be gathered, along with the wives and the children of other staff members, watching the Tigers play.

The cheering section is at the core of Nadelen’s philosophy as a coach, and the staff-as-extended-family approach has been at the heart of the team’s success in Nadelen’s six years at the helm.

“You realize your family is your first team,” Nadelen said, referencing a lesson from his mentor and former Tiger head coach Tony Seaman.

In late May of 2011, when Nadelen was hired as head coach, the expectations were clearly set high. Then-AD Mike Waddell stated his desire to compete annually for CAA championships and become national title contenders.  He joked that Nadelen was “Captain America,” and he called his new coach a “world-class hire.”

Nadelen didn’t shy away from the expectations.

“I don’t think that’s something that Towson cannot attain. It’s going to come through a lot of hard work and effort and some luck at times, I guess. But I think every team wants to win a national championship and compete at that level. I can’t see any reason why that can’t be Towson. That’s always a focus of ours,” he said to the Baltimore Sun in 2012.

The expectations have been met, and Towson has become a model of consistency. The Tigers have won four CAA championships under Nadelen. After a slump in which the Tigers didn’t make the NCAA Tournament during a six-year stretch, they’ve been their four times, earning their first postseason wins since the early 2000s. Towson has finished better than .500 each of the last five years; prior to 2013, it hadn’t had a winning record since 2007.

Then this season, Towson had a run to the NCAA Semifinals, taking a lead over Ohio State before falling at Gillette Stadium in Foxborough, Mass.

There are many factors to the consistency Towson has built, but a big one is the steadiness of the staff and its unified message and philosophy.  Gilardi and Cocchi have remained on staff as the top assistants the entire time. Despite other job opportunities, Towson has retained the trio.

“There’s no way that Towson lacrosse is in the Final Four this year or having consistent CAA opportunities without having the consistency we’ve had in our program with Dan and Anthony,” Nadelen said in an interview this summer.

Family is a big part of it.

Nadelen has two kids, a son and a daughter, who is five years old. Gilardi has three, his oldest son just a day younger than Nadelen’s daughter. Their wives were hospital-mates at nearby GBMC. Cocchi, a 2004 Towson graduate, has two sons. Nadelen’s wife, Mary, is a member of Towson’s kinesiology faculty.

The three of them even live within two miles of each other — until recently they were even closer than that.

“I don’t want to miss out on valuable time with my own family, and I want to make sure they don’t either. When they see me take some time to get home for dinner, things like that, they see that they can. I’m a big believer that, get your work done, make sure we’re prepared, but take time to get away with your family,” Nadelen says. “It’s channeled through our team as to how the big picture is important. It’s something they don’t abuse and something they respect.”

Read the full article at InsideLacrosse.com.