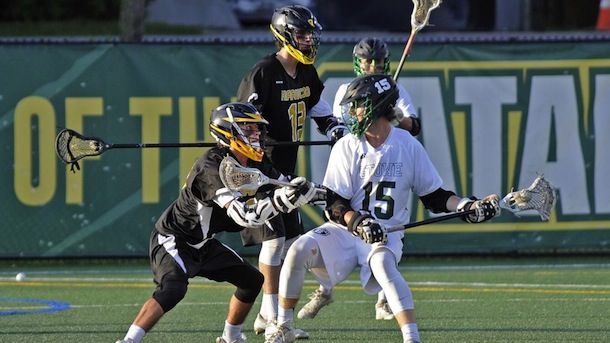 But it wasn’t easy. The Highlanders (11-7) controlled the tempo for most of the first half and fought hard in the second half after the game was tied. Yet the Raiders (11-4) never quit, with scores by Trent Gutstein and Will McIntosh (four goals each), Keegan Loughran (back-to-back goals), Alexander Carpenter (two goals and an assist) and Jace Boerger (game-winner), in addition to five assists from Jackson Felis.

Coached by Russ Beilke, the Highlanders saw scores from Connor Woolley (five goals, two assists), Connor Cameron (two goals), Noah Williams, Hunter Wimble (with an assist) and Ely Kalkstein (plus an assist), along with Sam Towne and Ryan Garrand, one assist each.

“He never saw the field that day, but his positivity and energy on the bench really lifted us as a group,” Handwerger said. “It shows how important one’s role as a member of a team can be.”

Another major lift was provided by a first-year player. When the Highlanders looked like were pulling ahead in the first half, Raiders freshman McIntosh scored four first-half goals to not only keep the team in contention, but he gave his teammates and fans a big boost, setting off a celebration in the stands.

McIntosh’s performance wasn’t a surprise to Handwerger. He’s the vice president of Stowe Youth Lacrosse and has coached McIntosh since he was a youngster.

“We found ourselves in a precarious situation. I felt what those goals meant [to the team and fans]. He came through pretty big for us,” said Handwerger.

“He’s a gifted player and a student of the game―he studies the game out of practice, and it shows,” the coach noted. “And he’s very strong and very fast—that’s why he made such an impact for his age.”

“Most kids struggle [when they move on to high school],” Handwerger added of the freshman Raider, “but that’s not the case with Will. His commitment to the sport of lacrosse and the lacrosse community is unparalleled. He’s highly coachable and a really good kid, too.”

While the Stowe Raiders graduated seven seniors, the coaches expect that they will continue to be competitive in Vermont high school lacrosse, due to a strong youth program at Stowe Youth Lacrosse.

“We have kids entering their freshman year that have already played for a few years, and a group of talented coaches and dedicated parents to make our program thrive,” Handwerger said. If McIntosh’s performance was any indication of what the underclassmen will bring, along with the Raiders’ returning players, the team should be just as tough next lacrosse season.