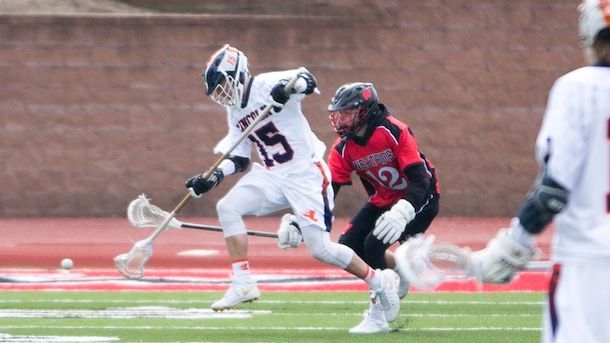 Rampage is a verb for when an especially large group of people rush around in a violent and uncontrollable manner.

"We are nice here in Nebraska,'' said Rampage President, Chris Howe. "Our team is special. We have great parents. We have awesome parents. We tell them there is no booing the refs or the other team."

Howe is clearly a lacrosse fan.

"Things can change on a dime,'' she said. "Lacrosse is like being in the bottom on the ninth all the time."

Lacrosse began to sprout in Lincoln back in 2007.  A mere six years later, this program was making inroads at the local high school. That year (2013), the Rampage won a state championship. The Rampage has two programs involving the youth and high school level. And it continues to spread as the Rampage has eight teams in Nebraska and three more in neighboring Iowa.

"We really start them out at third grade,'' Howe added. "We want them to get a taste of the sport with clinics."

To make sure there is cohesion in this program, the Rampage bring in a referee from Omaha who explains the game to the young players and parents alike.

"We know it's football country out here,'' she said. "But lacrosse is also a contact sport. We have to teach about concussions."

Yes, Howe is lacrosse crazy but that doesn't mean all of these players have to devote all of their time to her favorite sport.

"We want our kids to play football and hockey if they want to,'' Howe said. "We also want those baseball players who got cut."

Howe watches as the young players mature and get better quickly.

As expected, the Rampage brings in players from all over.

"They don't see each other at school,'' Howe said. "Our team is built from different schools. So we have team building exercises. We have Monday night dinners. We have chalk talk. It's a family atmosphere."

Howe is also pleased that her coaches stick around for awhile.

"Our head coach has been here for 10 years,'' she said. "Our coaches stay here. We really like when our former players come back and help the kids."

The present head coach is T.J. Westfall. He has quite the Rampage story to tell. He started playing for the team in 2008. He took lacrosse to college at Nebraska Wesleyan University. He was a three-year starter while playing left guard.