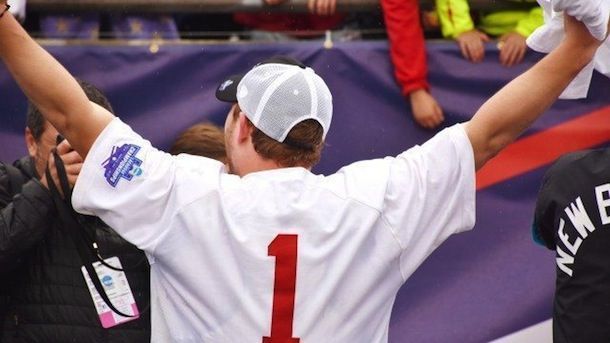 The article below is about much more than just the skill and athleticism stuff, because there are also a lot of similarities that the vast majority of college lacrosse hopefuls share whether they are playing for a scholarship, or paying to play college ball.

When I went off to Wesleyan University (NCAA D3), with the intent of playing lacrosse, I was going in blind. It was the late 90s, and my high school had only had a team for two years. No one older than me from my school had ever played college lacrosse. I didn’t really talk to my friends from other towns who were already playing in college. My mom and dad didn’t play in college. I really had no idea what to expect, and I really did zero research on my own.

Heck, I was so unsure of my status that I didn’t know if I’d even make the team, let alone ever see the field. Maybe all these guys from prep schools and Long Island and Baltimore were just going to be too good for me to compete with… Maybe my athleticism wouldn’t quite measure up in college… Could I handle the academic work load on top of the lacrosse? What will my academic work load look like exactly? Did my 400 student public high school prepare me for a rigorous college academic experience, where I would be one of 2700 students, many of whom came from elite private schools?

Doubts swirled in my head, but still, I didn’t talk to anyone about it.

Looking back, I wish I had.

Because then I would have realized a couple of things, and it would have helped me adjust and acclimate to my new surroundings faster. If you can talk to someone, I highly recommend it. In addition to that, here are a couple of things that I would tell ANY student-athlete looking to play college lacrosse:

When you get to school, you’ll have plenty of time on your hands, but you’ll also be surrounded by a new environment, and new challenges. Do NOT be one of those players who says they will get in shape when they start in the fall. Come in to your first college year in the best shape of your life, if at all possible. Unless you’re injured, there is NO reason to come in soft. Come in pumped and primed, because college life is different, and it takes some time to adjust. Don’t count on getting in shape as you’re settling in. That’s a recipe for disaster.

RUN, RUN, RUN. Work on your stick skills as much as possible. Get stronger. Become more flexible. Be a machine. The temptation of one last lazy summer is there, but do not fall victim to it. Even if it’s late August, and you go off to school next week, or just got there, you need to start working now, if you haven’t already.

Remember when you were a freshman in high school, and all the older players were bigger, stronger, faster, and usually just better than you? That’s going to happen again (perhaps to a lesser degree), so coming in to your first year in great shape (and with a great set of stick skills) makes all the difference in the world. Plus, the spring season is a long grind, and if you’re not in great shape 6-8 months before it ends, you might not make it through in one piece. Seriously, when you play college lacrosse it takes a physical toll, and you need to be ready for it.

I worked out like a madman before I went off to play college lacrosse, but I definitely didn’t spend enough time on my stick work. Probably a big part of why I got switched to LSM from short stick midfield, but I’ll get to that later.

Also, read some books during the summer. Your brain needs a workout too, and pool time/TV/Instagram does not cut it. You don’t need to work for NASA all summer, but don’t let your brain turn to complete mush, or the fall semester will be a rude awakening.

So what do you do when you get to college? Realize one thing first…

You Are NOT Alone

Some people go to college with friends, they stay best friends, and it’s super easy because… they already have a trusted friend. Many people don’t do this. They may know some people at the school, but there is a good chance they feel kind of alone. This was me freshman year. I knew NO ONE. But I met people, and then I met more people. And the more people I met, the more I realized that they were in the same boat as me, which was the solo boat.

Even if they knew people already, most first year students were still looking to define themselves anew. The people who adjusted the fastest were usually the people who realized that everyone else was in a pretty similar situation, and formed new friendships by keeping an open mind. This can be hard for some people, so you might need to really make an effort here, but it’s worth it. Just remember, you are not alone. That insecurity you feel… that same insecurity I felt? We all feel that to some degree.

On the other hand, you will also find a pre-existing group of people you can “join” in the lacrosse team. These are people you will spend a lot of time with over the next four years (assuming you play all four years), so getting to know them well, and early on, is a good idea. At the same time, do not limit yourself to just the lacrosse team, or any one group. Don’t rely on the lacrosse team as a crutch. There is so much out there, and so many people to meet!

The fact is, most college students are trying to find their path, especially in their first year or two (or three or four… or five). Remember that all around you there are people in the same situation. If you’re struggling, find someone to talk to. You’ll likely find they’re having similar issues, or know what you’re going through. When I was struggling during my first semester, I actually went to speak with Coach Raba and I’ll never forget how caring and helpful he was. Your coaches are a resource, so use them! They’ve seen this before, and the vast majority of coaches I’ve met just want to help their players, simply because they legitimately care.

For many people, college is their first taste of “freedom”, in the sense that they make their own hours, and define their own lives. For any kid coming from a home with stricter guidelines and rules, this newfound liberty can be awfully tempting, and the abuses can range from skipping a class or two to going WAY overboard. According to NCAA studies, lacrosse players are some of the most likely to go WAY overboard, so this point deserves serious consideration. Do you want to be a wilding out lax bro? Or do you want to be a college student-athlete? The choice is yours.

The best way to find balance between academic success, athletic success, and a social life is to beorganized. Trust me on this one. When I was starting out, I was kind of organized, and it helped me quite a bit. If I had been truly organized, I could have done so much better, in so many ways. If I had been any less organized? I probably would not have made it through a full first year. Organization can make or break you.

Create a schedule for yourself. STICK TO IT. Wake up at a reasonable hour each day. Eat breakfast each day BEFORE going to class. Always go to class. Always take notes. Do as much of the assigned reading as possible. If you can handle all of it, read some non-assigned materials. Create dedicated study hours. Create dedicated gym hours. Pencil in some time to relax a little, watch a movie, or call your family. CALL YOUR FAMILY!

I did very few of those things consistently (I did call my family and create dedicated gym hours), and not doing it hurt my grades, athletic performance, and general well-being. I speak from experience here. Schedules can be life savers, especially in year 1 as you adjust and learn what it takes to play college lacrosse.

If Wednesday night is a study night, but some of your friends want to go out, what do you do? You need to make that study night up somehow. Do you have an early class on Thursday? Does your schedule have any openings? A schedule allows you to take care of everything you know you need to, as opposed to leaving it to chance.

Identify some evenings or nights where you can spend some time socializing with friends, or working on a pet project that you love. Create balance in your life via organization. This will keep you from stretching yourself thin, and prepare you for the extremely demanding spring semester. If you’re not organized, there will come a time when you need to choose between school, lacrosse, your friends, and your family, and it will hurt you and those around you. Experiences like this are part of growing up and becoming an adult, but that is no excuse not to prepare for it as best you can, and organization is your best weapon and training.

Similar to the point above, I believe it’s very important to find good people in a new place – whether you play college lacrosse or not! Surround yourself with decent people, who are honest and hard-working. Don’t worry about who is “cool”. It’s college. Everyone is cool in their own way. Think about who will be there for you when you need a friend, not who will be there when they need a beer. Find people you can trust. They don’t have to be the “same” as you, or even think you like you. They just need to be good people. When times get tough (and they might), this will be the best decision you’ve ever made.

Sometimes these people will be on your lacrosse team. Sometimes they will not. Don’t limit yourself in this regard.