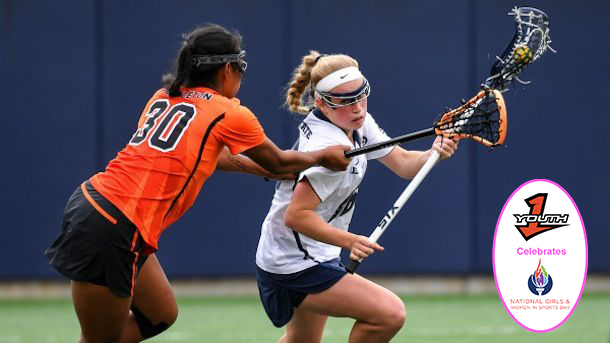 Street, Maryland’s Maria Auth has come a long way from playing lacrosse as a pint-sized youngster, and she’ll only keep going. She's been on the Youth1 radar for years! - see the Y1 article from 2012. Since then, she just finished her freshman year at Penn State University, where she made her mark playing lacrosse for the Nittany Lions while also excelling in her classes.

Starting the last two games of the season for Penn State, Auth showed flashes of brilliance. In an NCAA quarterfinal matchup against No. 5-ranked Princeton, she helped propel the team to a 14-12 victory with four goals and an assist. Not only did she tie up the game in a competitive second half, Auth recorded a hat trick just 14 minutes into the game.

"That was honestly the best feeling I've ever experienced," Auth said in a postgame press conference. "I've never really experienced anything like that. It was a credit to my teammates getting open, helping me out with clearing through. I couldn't have scored those goals without them."

Although Penn State lost in a Final Four game against top-seeded Maryland, Auth contributed a goal and an assist. Thanks to her performances, she was named by Inside Lacrosse as a rookie of the week.

She finished the year with 18 goals and 12 assists, and should increase those totals next season.

In addition, Auth is flourishing in her academics, finishing her second semester with a 3.8 GPA.

“Hopefully, this will be the first step in a very successful academic and athletic experience at Penn State,” said her proud father, Michael.

Auth’s ongoing success should come as no surprise to anyone who knew her growing up. She started playing lacrosse at just 6 years old, then during middle school joined both Churchville in the Maryland Youth Lacrosse Association at the highest division and the Greene Turtle Lacrosse Club. Auth was an attacker who could take over the field while showing outstanding ability and leadership. She was also the leading scorer for both teams. Those talents were a harbinger of things to come.

Auth then moved on to North Harford High School, where she was named top athlete of the school. She played basketball, soccer and lacrosse, and being named all county in the last two. Auth was dominant at lacrosse, finishing her senior year with 87 goals with a career total of 177. She was also a top student, graduating 11th in a class of 300-plus and a member of the National Honor Society and French Honor Society.

Being an accomplished student and talented, driven athlete made it a natural to wind up in a Big Ten school, which became Penn State University.

“I chose to attend Penn State because of the world-class academics, family atmosphere and for the opportunity to compete at the highest level athletically,” Auth said on www.gopsusports.com. And she certainly has proved she can compete and then some.

So whether it’s in the classroom or on the lacrosse field, this won’t be the last time you’ll hear about Maria Auth.