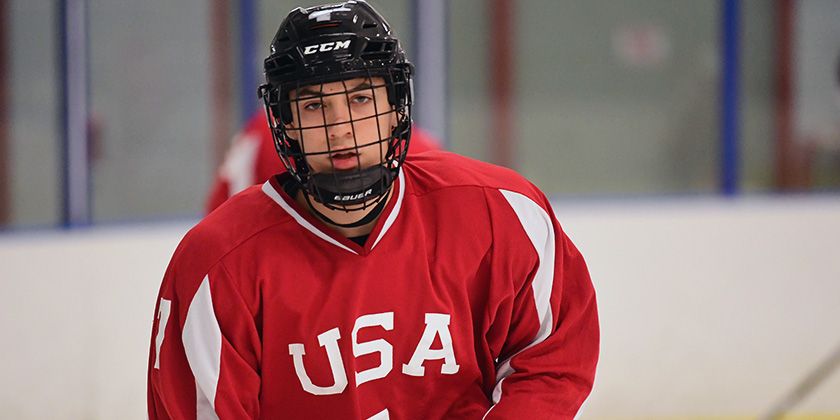 Merrimack College received a commitment from its first 2003-born recruit, defenseman Michael Rubin, just before Thanksgiving. Rubin is a 4-star recruit who has good size already at 16 years old.

“Is a surprisingly nimble defender who is listed on the roster at 6’1 180,” our scouts said this fall. “He has good size and does a nice job of playing physically in his own zone, shutting down opportunities along the walls. He isn’t afraid to get up ice and start the rush if need be but there were plenty of other offensive options up front where he didn’t have to do it all himself. His versatility of being able to lead the rush or jump up to create numbers gave the Rockets more options offensively as we saw when they played Rochester.”

Through nine games this season with the New Jersey Rockets 16U team, Rubin has 12 points (5 goals, 7 assists). Last season Rubin had 38 points in 30 games for the Rockets 16U team and also appeared in 25 games for Don Bosco Prep; he was also selected for USA Hockey’s Select 15 camp this past summer.

NZ: How did you first fall in love with the game as a kid?

Rubin: “I started skating when I was three years old and I loved the game ever since.”

NZ: How would you describe yourself as a player? What are your strengths?

Rubin: “I think I am a two-way defenseman and use my hockey sense and hands to make plays on the ice. I like to join the rush and contribute offensively when I can.”

NZ: At the same time, what are some things you’re looking to improve this year?

Rubin: “Getting stronger and playing more physical are two of the most important things to get better at for me.”

NZ: What made Merrimack the place you wanted to play your college hockey?

Rubin: “I think the coaching staff’s confidence in me as a player was the most important thing when making my decision. I also loved the campus and facility at Merrimack.”

NZ: What has it been like playing for the NJ Rockets? Where do you feel like your game has grown the most with that organization?

Rubin: “It has been great to play for a top team with good players and coaches. I have definitely developed my skating and compete while playing here.”

NZ: I saw in the press release from the Rockets, Coach Brown said your work ethic has been upped this year and you’ve battled through some adversity. What was the adversity? And what do you think helped you get through it?

Rubin: “The whole team was disappointed when losing at Nationals last year and we all used that as motivation to become better players and a better team.”

NZ: I think you announced your commitment on Thanksgiving Day. Did you give Coach Borek the news before he ate his turkey?

Rubin: “(Laughing) I actually let Coach know a few days before and ended up announcing on Thanksgiving.”

For the full article check out Neutral Zone's write up here.