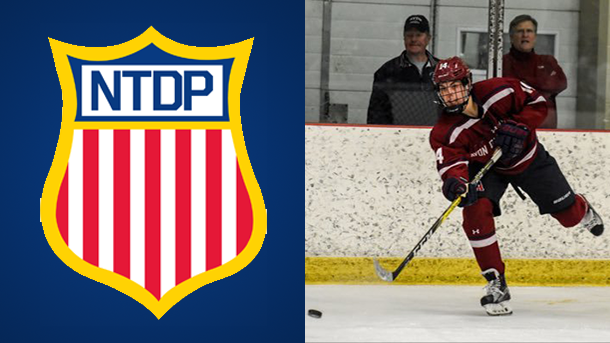 Ryan Siedem’s tremendous talent in hockey is certainly getting him noticed. The Madison, New Jersey resident recently announced that he will be joining the USA Hockey National Team Development Program., which is located in Plymouth, Michigan.

This comes on the heels of Ryan declaring his commitment to play for the Boston College Eagles in 2020-21.

“Honored to be selected to play for @USAHockeyNTDP for the next two years,” Siedem wrote on Twitter. “Can't wait to get things started.”

“We are really proud of Ryan,” said his father, Peter Siedem. “It has been a goal of his to play for the National Team since he was a really young kid.”

Ryan, 16, is finishing out his sophomore year at Avon Old Farms in Connecticut. He is a 6'2'', 195-pound defenseman who is playing for the school’s Winged Beavers. He previously played for the AYHL’s New Jersey Colonials.

His skills on the ice have drawn praise from AYHL program director and coach John DiNorcia and Avon Old Farms’ Winged Beavers coach John Gardner. Both have noted that he was an excellent addition to each team with a distinctive blend of size, skating ability, puck skills and on-ice intelligence. Gardner and DiNorcia also predicted that Siedem will develop into an outstanding player and do very well in the future.

His younger brother, Jason, is another rising hockey star of the Siedem family. He is an eighth-grader and forward for the New Jersey Devils Youth Hockey Club, as well as a former player for the Colonials. He also announced his commitment to play for Boston College in 2020-21 during the same week as Ryan this past January.

Big brother Ryan will join the National Team this August and spend the next two years in the program, which will include playing for the U17 team and the U18 squad the following year.

“His dream is to leverage this tremendous hockey development opportunity into a great college hockey experience,” Peter Siedem noted, “and ultimately a successful pro career, as well. “

Looking over USA Hockey’s all-time roster, Siedem is following in the footsteps of many hockey players who have been drafted by NHL teams: http://www.usahockeyntdp.com/all-time-roster.

But for the not-so-distant future, Peter Siedem notes that Ryan is anticipating another great opportunity: “He is really looking forward to playing with his brother at BC after playing for USA Hockey,” he said.

To read about the offers that Ryan and his brother received from Boston College check out the article here.