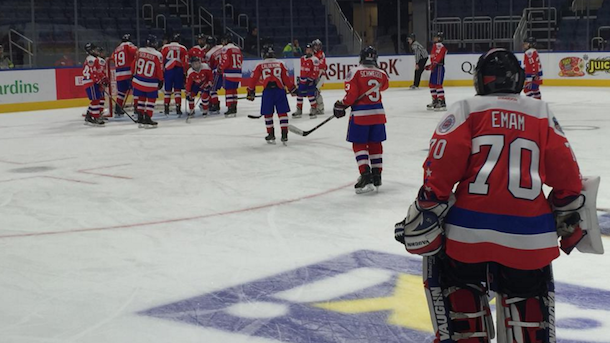 HUNTSVILLE, Ala. – The Atlantic Youth Hockey League is pleased to announce that the Washington Little Capitals won the 2017 Southeastern District Championship at 14U and 15-Pure to advance to the 2017 USA Hockey/Tier I National Championships.

The Little Capitals will join the North Jersey Avalanche (15-Pure, 16U, 18U) and the New Jersey Colonials (14U), in representing the AYHL at the National Championships. The tournaments are being held in Scottsdale, Arizona (14U, 15-Pure) and Pittsburgh, Pennsylvania, April 6-10.

“We are extremely proud of the entire Little Capitals organization,” AYHL commissioner Gene Palecco said. “We congratulate them on their accomplishment and we know that the Little Capitals, the Avalanche, and the Colonials, will be great ambassadors for the AYHL at their respective national championship events.”

At 14U, the Capitals edged Thunder Hockey in overtime to punch their ticket to nationals. Brandon Davis netted the game-winner just thirty-two seconds into the extra session. Trailing 2-1, Tyler Mercier tied the game for the Little Capitals with just 20 seconds remaining in regulation to force overtime.

At 15U, the Little Caps used an early victory over Thunder Hockey in round-robin play to reach the finals, where the team defeated the Carolina Junior Hurricanes, 4-2, to reach the national tournament.

The program had an opportunity to send as many as four teams to the national championships as the organization’s teams at 16U and 18U also reached the Southeastern District Championship game. Both teams fell to the Tampa Scorpions, including a double-overtime setback at 18U. The organization would have been the first in the AYHL’s modern era league to send four teams to the Tier I nationals

This article first appeared on www.atlantichockey.org, one of Youth1's sources for Hockey articles. To submit your site for consideration for Youth1 syndication, please email Laura Petrillo at lpetrillo@youth1.com.