Anthony Cappello is one of the best players from the Ossining, NY area in the Class of 2023.

The 5-foot-11, 148-pound Capello, who attends Ossining High School, is a dynamic player that works as a forward, wing, and center for the Westchester Express. 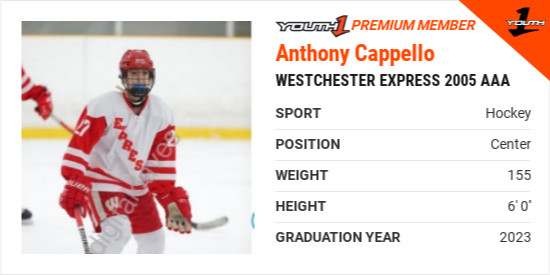 Cappello has earned plenty of recognition during his career, such as being selected to the New York State USA District Developmental Camp in 2019.

Cappello is humbled by the accolade.

“Being selected to this group means that I am in the top 80 kids in my age group in New York State,” Capello said. “It was a good experience to play for USA Hockey coaches and to play with talented kids.”

No matter the opponent, every game Cappello is determined to give it his all.

Cappello is going all out.

The motor is always at full throttle whenever Cappello steps between the lines.

“I am an offensive forward,” Cappello said. “I like to score goals and set up scoring chances but at the same time I like to be defensively responsible.”

Cappello has great passion and energy whenever he’s on the ice. Cappello tells why he enjoys the game of hockey so much.

“I love the speed of the sport the most,” Cappello said.

Cappello has learned many valuable lessons from playing hockey that he applies to his everyday life.

“I’ve learned that you have to work hard to get better,” Cappello said. “Being lazy is not an option.”

“All of the people I meet and experiences I have,” Cappello said. “Winning and losing is a part of it. You learn from experiences.”

“Anthony plays wing and center mostly center. He is a good faceoff man. Plays hard down low in the D-Zone and offensively he is quite crafty,” Minkler said. “For a skilled guy he can play with good grit and physicality.”

Cappello discusses what separates him from other players.

“I think that I take the game seriously,” Cappello said. “I am a competitor. I try to lead by example.”

Cappello takes his role as one of the leaders on the team very seriously. Cappello makes sure he’s a daily positive influence on his peers.

“I am a supportive person to all of my teammates. I try to help when I can,” Cappello said. “The best advice I give is to play simple. Try not to force the play. Be responsible every shift.”

Minkler adds that Cappello is one of those consummate teammates that every squad needs to be successful.

“He is a good on-ice leader for sure,” Minkler said.

Cappello is appreciative of having amazing male role models that are supportive.

“I’ve had great coaches that teach me to play smart. They have shown trust in me,” Cappello said. “The best advice they give is to play simple and play smart.”

“Anthony and his linemate Nick Romeo led the team in goals and assists last season,” Minkler said. “So it's not a singular big play, but his consistency against all teams all season long that has been impressive.”

Cappello has excellent awareness that puts him in position to thrive.

“Anthony can read the D as well as anyone out there, and on the offensive side of things he is able to find his teammates in quality spaces,” Minkler said.

Cappello is on the grind to perfect and hone his craft in any way possible. Minkler loves Cappello’s drive and determination.

“Anthony is a rink rat. He is always at the rink working on his game and seeking the knowledge to improve,” Minkler said. “He also started an off ice regiment this past spring that had really helped his strength around the puck.”

Cappello is constantly striving for excellence.

“I want to get good grades to help me get into a good college,” Cappello said.

“It’s hard work to play hockey. Sometimes it feels overwhelming to push myself to be better but I do it,” Cappello said. “I find that inner strength to be a better person and player.”

Minkler explains why he compares Cappello to this former standout.

“I am probably dating myself, but he reminds me of a Brian Trottier,” Minkler said. “A great combination of skill, grit and leadership.”

Cappello patterns his mentality after this star right winger and plenty of others.

“I’ve always liked Patrick Kane,” Cappello said. “But I have many players that I like who are smart with the puck.”

Cappello lists photography and media production as his favorite subjects in school.

Minkler lists the improvements that can take Cappello’s game to the next level.

“Everyone liked a better two-way player, so we are working on the value of providing good backside pressure and how that leads to offense off transition,” Minkler said.

Minkler believes the sky is the limit as long as Cappello continues to stay hungry.

“I think he is on a tier 1 prep school track, with a good shot at D1 college if he keeps working hard,” Minkler said.