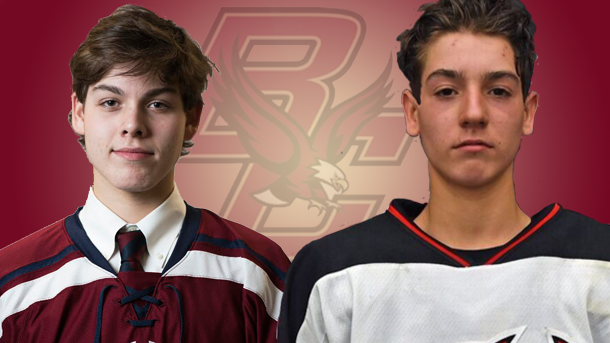 Madison, New Jersey’s Ryan and Jason Siedem both announced their commitments to play for Boston College’s hockey team for 2020-21. The Siedems are following in the tracks of two other brothers from Jersey who were recent standouts for BC―Johnny and Matty Gaudreau. They also played in the Atlantic Youth Hockey League (AYHL), just like the Siedems. The Gaudreaus are from NJ’s Carneys Point, and Johnny has gone on to wow fans while playing for the NHL’s Calgary Flames. Matty just finished his senior year at BC, helping them to its best-ever start in Hockey East competition.

As for the Siedems, it must have been quite a week in January when they both announced their commitments on the 17th and 18th.

Older brother Ryan, 15, a sophomore at Avon Old Farms in Connecticut, is a 6'2'', 190-pound defenseman who is playing for the school’s Winged Beavers, where he is continuing his hockey development and academic growth. He previously for played for the AYHL’s New Jersey Colonials.

Ryan’s post on Twitter stated, “Honored to announce my commitment to play college hockey at Boston College. Thank you to everyone who has helped me along the way.”

While playing for the Colonials, he has achieved an impressive list of records, making it into the top five of all-time points, assists, points per game, points per season and assists per season.

“Ryan has a unique blend of size, skating ability and puck skills with extremely high hockey acumen,” said John DiNorcia, who coached Ryan in the AYHL and is the program director. “This allows Ryan to excel at any role a coach may need, whether it be a shutdown of a defenseman, taking away the opponent’s best player or a quarterback on a power play.”

Avon Old Farms’ coach John Gardner knows a thing or two about great players. He’s coached future NHL stars such as Brian Leetch and Jonathan Quick, and he thinks Ryan will do very well at BC.

“I’m sure he’ll develop into an outstanding player. He’s a smooth skater with good hands; good instincts—he’s pretty Savvy,” Gardner said. “He fit right in as a sophomore [for the Winged Beavers]. He’s been a great addition to the team.”

Jason, an eighth-grader, is a forward and a member of the New Jersey Devils Youth Hockey Club, and a former player for the Colonials, as well.

“I would like to thank my coaches John DiNorcia, Steve Riley, Hank Coxe, all of my teammates and the entire NJ Youth Devils organization for offering me the opportunity to develop my hockey skill in a positive atmosphere,” he said on www.devilsyouth.com. “The two Bantam years I have spent as a member of Devils Youth have been incredibly supportive to my dream of playing major college hockey. I look forward to making use of the many lessons I learned while a member of Devils Youth, in representing the Boston College Eagles and competing in the Hockey East Conference.”

“It has been a pleasure to watch Jason’s growth and development over the past three seasons,” said AYHL’s DiNorcia. “It’s always surprising to me when an eighth-grader is offered a commitment to play Division One college hockey. That being said, Jason is a dynamic hockey player with tremendous upside. He partners that with the highest degree of leadership, character and insatiable desire to get better, and an intellectual curiosity to the sport.

“There were other schools that were attractive to them; they could have gone together to other schools―top-notch programs,” DiNorcia noted, “but the Boston area was always on their radar. It’s always been a hotbed of hockey.”

DiNorcia added that Ryan and Jason “are thrilled” that they’re both going to BC together. Will the brothers achieve success like the Gaudreau brothers did at Boston College? Coach DiNorcia stated, “I am confident that both boys will hit the ground running in their freshman years at Boston College and be immediate impact players to the program.”